Shock and sadness at schools where Hawe parents taught 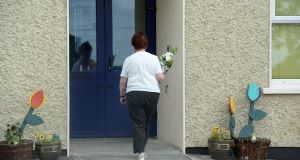 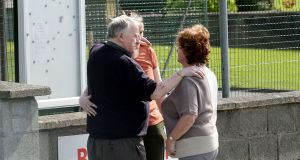 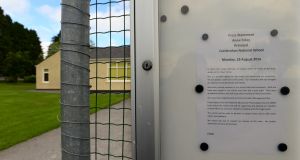 The first cars started arriving at Castlerahan National School just after 8.30am on Wednesday.

The school’s deputy principal, Alan Hawe, killed his wife Clodagh and their sons Liam (13), Niall (11) and six-year-old Ryan in their home near Ballyjamesduff. Their bodies were found on Monday morning at their home. Niall and Ryan attended the school, while Liam was a past pupil.

Teachers and counsellors carried toys, flowers, cakes and several two-litre containers of milk into the school, along with their laptop bags. They were grim-faced and pale and looked as if sleep had been scarce lately. They had nothing to say. There was nothing to say.

Ten minutes later, the blinds were opened. Each front classroom window had someone stationed behind it, watching out and waiting for the first children to arrive. When the first car pulled up a few minutes later, with three small boys, the school door was held open for them, and they were warmly greeted as they ran inside.

Then the cars started arriving in numbers. Many parents dropping off children did not immediately get out of their cars. They sat in their cars for up to 10 minutes, talking intensely to their sons and daughters, before getting out and starting the walk together to the front door. Being late to class was irrelevant on this particular first day back at school.

Many children being dropped off were accompanied by both parents, holding their hands tightly. Parents were stony-faced, and subdued, nodding silently at each other in acknowledgement, while the younger children laughed and ran ahead to join friends. Many parents carried cards in white envelopes, which they handed over at the door.

Some of the older children were slower to walk up the school path. One boy of perhaps 11, reluctantly went inside, and then soon came out again, accompanied by both parents. They walked him slowly around the basketball court, heads close together, arms around each other, while he pulled up his hood and put his fists in his eyes.

Some families arrived together in a convoy of cars, choosing to walk in together as a large group. Hands patted shoulders. People shook their heads. They pulled each other in for tight hugs. They gathered up their children and walked as one into the school.

In all of this, it was also a first day at school for its youngest pupils. Those were the smallest children, with the longest uniform skirts and the whitest knee-socks and the baggiest jumpers. They carried new backpacks featuring characters from Star Wars and Frozen and the Minions.

They skipped across the playground to the front door. They had no idea, one hopes, of what had happened to two of their fellow pupils and the deputy principal who should have been at the door to greet them on their first day at school.

It was very quiet. The nearby church bells of St Mary’s rang at 9am, and sounded loud as cannons in the school car-park, where the loudest sound for almost an hour was the crunch of gravel under car tyres.

Virtually all parents accompanying their children went inside the school, and stayed there for up to half an hour and more. Counselling was being made available to children, teachers and parents, by the psychologists from the National Educational Psychological Service. Some parents emerged red-eyed, holding tissues balled up in their hands.

For an hour or so, cars were double and triple parked beside each other in the carpark, hemming each other in. It didn’t matter. Everyone knew where to find each other, and why they were parked so erratically on this morning. Eventually, everyone drove away, the front door closed, and the first school day of 2017 at Castleranhan National School finally began.

Meanwhile, it looked for all the world like normal day at school for the children of Oristown National School in Co Meath.

But of course it wasn’t as they had just days earlier lost their teacher Clodagh Hawe.

Pupils had returned to school after their summer holidays on Tuesday. But a long summer holiday filled with the things of childhood came to an end with the devastating news of the death of their young teacher.

Shortly before 9am, cars began arriving outside the school, pulling in by the low white wall at a busy junction in a rural area where traffic flies by between Kells, Navan and Slane.

Three girls in uniform dropped their schoolbags at the front door and began to shoot basketball hoops as other children trickled through the gate. Some parents – mostly mothers - waited for some time with their children in the car, before opening doors for them, planting schoolbags on their bags, hugging them and sending them on their way.

The yard soon filled with children and their noise and play, and they were greeted by teachers as they lined up to enter the school.

Colleagues, themselves grieving Ms Hawe’s loss, will be assisted by counsellors from the National Educational and Psychological Service in helping their young pupils to deal with the tragedy.

Parents and teachers gathered at the school gates on Wednesday did not wish to speak to reporters and one referred to a statement already issued by the principal, Ann O’Kelly Lynch.

Ms O’Kelly-Lynch said on Monday that Clodagh Hawe was a much loved and valued teacher and that she would be greatly missed by all who knew her.

“This is a terrible tragedy for the families, schools and the communities involved. We are deeply saddened by this event. Our sympathies and thoughts are with Clodagh’s family and friends.”