Shell rejects claims over delivery of alcohol to Garda

Contractor claims Christmas deliveries made in 2005-2007 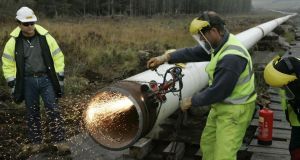 Shell E&P Ireland (Sepil) has said it “unequivocally rejects” the allegations “regarding delivery at any time of alcohol to An Garda Siochána” on its behalf by a former contractor, OSSL.

In a statement issued yesterday, the company said it “also therefore rejects the claim that OSSL were paid for delivering alcohol to the Garda”.

“Such actions would constitute a serious breach of the Shell Group’s long established business principles and code of conduct to which Sepil fully commits in the conduct of its operations,” it says.

However, Desmond Kane of OSSL said yesterday that he was “highly disappointed” that Sepil would make what he termed an “incorrect” statement, and insisted that deliveries of alcohol to the gardaí were made by his company during Christmas 2005, 2006 and 2007 - with 2007 being the largest quantity.

OSSL, owned by Mr Kane of Glasgow and Neil Rooney of Belfast, was first hired in 2002 by original Corrib gas field developers Enterprise Oil to provide hats, gloves and other items.

Mr Kane says its base was in Bangor Erris, Co Mayo, opposite the original Corrib gas project offices.

It was retained by Shell when Royal Dutch Shell bought out Enterprise, and says it provided “accommodation services”, which could range from equipment at any hour of day or night, to “sweeteners” for local residents. Its services were discontinued in 2010, after which Shell has confirmed that a “contractual dispute arose”.

Mr Kane said his company was still owed over €43,000, but that Sepil had destroyed receipts. He said that the company (Sepil) had insisted that invoices be made out for other items through another contractor attached to the Ballinaboy gas terminal project.

This contractor was unable to comment on the issue yesterday when contacted by The Irish Times.

In its new statement, Shell said that “the claims by OSSL about delivery of alcohol to the Garda in general were first raised in 2011”.

“The claims by OSSL that they had received payment for alcohol allegedly delivered to the Garda in 2005 and 2006, first emerged in late 2012,”the company said.

“No evidence has ever been put forward by OSSL or any other party to support these claims.”

The Garda Press Office confirmed today that its “examination” of the allegations would include examining the claims relating to 2005 and 2006.

The fresh examination by Supt Thomas Murphy of Swinford Garda Station was initiated in July.

It is subsequent to inquiries into “allegations” made to a district officer on December 7th, 2011, which, the force says, “had found no evidence of alcohol being distributed to members of An Garda Síochána by, or on behalf of, Shell E&P”.

Mr Kane said yesterday he was willing to fly from London to meet Supt Murphy at any time, but had been informed that he was on leave until later this month.

Shell appointed a new public relations team to the Corrib gas project after the release of the Rossport Five in autumn 2005, and Mr Kane says that it was in this context that his company was asked to carry out deliveries .

Gardaí were deployed in large numbers in late 2006 to Ballinaboy to escort staff to work at the Ballinaboy gas terminal site during daily protests.

A copy of an invoice supplied by Mr Kane to the press, which he says was drafted “out of frustration with Shell E&P’s failure to pay for the deliveries” details two trips to Northern Ireland to purchase thousands of euro worth of alcohol which was then delivered to Belmullet garda station and to a garda superintendent in Athlone in 2007.

He says he was told that the Athlone delivery, to a garda on the Athlone by-pass, was for the Garda Sub-Aqua Unit, which had been deployed to monitor protest activity on water.

Sepil said today that it had a “ long established set of business principles and a supporting code of conduct which are fundamental to the way we conduct our business and which drive the behaviour expected of every employee”.

“Sepil conducts all of its business in accordance with these principles. The Shell Group also has a well established procedure for investigating allegations of breach of the business principles and this was fully deployed in response to the OSSL allegations when they were first made in 2011,”it said.

The company said it had a “proactive community relations programme focused in Erris” which was “normal and appropriate for projects executed by the Shell Group.” This had included distributing “modestly priced hampers” at Christmas time to residents living closest to construction sites and to local businesses and suppliers, but this was continued in 2010. It says “no support” for the project “was ever requested” in this context.