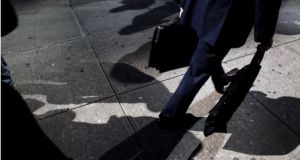 This time last year, the Phoenix Project charity had about 1,600 live cases of borrowers in danger of losing family homes, of which 20 per cent or 320 were in the ABC1 category. File photograph: Getty Images

The number of professionals including doctors, solicitors and architects seeking help from a leading charity representing distressed borrowers has doubled over the past year as banks and vulture funds increase pressure on relatively low-level property investors.

The Phoenix Project, a charity set up to help borrowers in danger of losing family homes, has about 1,800 live cases on its books in connection with mortgage arrears.

Of this total, 37.5 per cent, or 675 cases, relate to clients in the ABC1 demographic – a bracket covering individuals with relatively high income and education.

Project chairman John McGrath told The Irish Times the reason for the increase in contacts from people working in the professional sector was related to some financial institutions’ interest-only periods, of between five and seven years, coming to an end.

He added Bank of Scotland Ireland’s withdrawal from the Irish market had fuelled the increase in contacts from professionals. That bank had been the lender of choice for people buying second houses or extra apartments during the boom, and following its decision to leave the Irish market it sold these loans to vulture funds such as Cerberus and Pepper.

Both started applying pressure on borrowers as soon as interest-only arrangements came to an end and Mr McGrath said there had been cases where the vulture funds had seized the buy-to-let properties and were now coming after family homes too.

Mr McGrath said the situation had been exacerbated by the fact that Bank of Ireland and KBC, which also lent to borrowers buying investment properties, were also ending their five- and seven-year interest-only arrangements with lenders and looking for capital and interest payments.

While interest-only options afforded some investors a financial reprieve over recent years, it was only ever going to be a short-term fix for a longer-term problem.

“A lot of people who bought investment properties in 2005 were banking on the values increasing. But the opposite happened and many of those people had loans which were tied to family homes,” Mr McGrath said.