We ‘cannot have this type of corrupt government’ 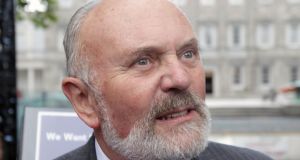 David Norris: said it was clear that Alan Shatter and Martin Callinan should resign “for the moral welfare and decency of political standards in this country”.

There were sharp exchanges in the Seanad when Independent Senator David Norris said it was time the Minister for Justice and Garda Commissioner resigned.

Mr Norris said it had never been his practice to call for heads because that was far too easy a political manoeuvre, but it was clear that Alan Shatter and Martin Callinan should resign “for the moral welfare and decency of political standards in this country”.

Mr Norris said the commissioner had described the two whistleblowers, who had been vindicated, as “disgusting” in their actions before the Public Accounts Committee (PAC).

Mr Norris said we “cannot have this kind of corrupt government and it is particularly inappropriate for a Minister for Justice”.

He added: “The Minister is a clever man and, in many ways, a very good, reforming Minister and . . . but he is not an honourable man and someone who is not honourable should not be Minister for Justice.”

Mr Norris said there were good people in every party, as he had said when Fianna Fáil was on its knees.

“I say it now to my colleagues on the Government side,” he added. “There is damn all difference between Fine Gael as a party and in government and Fianna Fáil at its worst.”

Fine Gael Senator Tom Sheahan said it was inappropriate for a member to cast a slur on a Minister who was not present in the House to defend himself.

“Senator Norris should have a little courage and do it when the Minister is in attendance,” said Mr Sheahan.

“Bring him in and I will be delighted to do it. I have no problem with it,” replied Mr Norris.

Mr Sheahan said Mr Norris should not “pontificate when the man is not here”.

Labour Senator Susan O’Keeffe paid tribute to Christine Buckley for “her courage and strength” in raising the difficult issue of the abuse of children.

“Rosita Boland wrote a personal account of her difficulties in this regard in last Saturday’s edition of The Irish Times ,” said Ms O’Keeffe. “Only 11 children were adopted under the post-Hague declaration between 2011 and 2013.”

Minister for Children Frances Fitzgerald should come before the House to discuss the issue, she said.