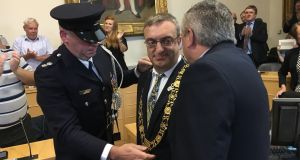 The new lord mayor said his priority will be to push for more social housing to be built directly on land owned by Dublin City Council.

Speaking after his election by Dublin City councillors he said: “There absolutely needs to be a step change in Government housing policy. This City Council must be given the resources and the support to build homes, to purchase homes.

“The sense of urgency is not being felt by those in positions of authority”.

He added: “My first act will be to request a direct meeting with Housing Minister Eoghan Murphy. My main priority will be to work with this council, with those in housing need, and with central Government to address the crisis” .

Mr Mac Donncha is also a board member on the City of Dublin Education and Training Board, the Board of the Hugh Lane Gallery and of the National Maternity Hospital.

The voting pact between Sinn Féin, Labour, the Green Party and several Independent councillors has been in place for the Dublin Lord Mayor elections since 2014, and has seen the parties choose a lord mayor from the voting bloc on a rotational basis.

Mr Mac Donncha succeeds outgoing Lord Mayor Brendan Carr from the Labour Party, and will hold the position for the next 12 months.

He has been a councillor for the Beaumont and Donaghmede North Dublin area since 2011. He ran in the 2016 general election in the five seat Dublin Bay North constituency, but finished 11th in the poll.

In Limerick Fine Gael councillor Stephen Keary was elected mayor despite an online petition containing over 2,000 signatures, which had sought his withdrawal from the mayoral contest after he recently made comments claiming non-nationals were scrounging off the State, and making worse the country’s hospital trolley and social housing waiting lists crisis.

Cllr Keary, who apologised “for any offence” caused, was elected with 27 votes following a pre-agreed voting pact between Fine Gael and Fianna Fáil.

The Galway native came out in front of Sinn Féin’s John Costelloe (on eight votes) and Solidarity candidate Paul Keller (who got two votes).

Polish mother of one, Nicola Kaluzyska – who had signed the petition calling for Cllr Keary not to contest the election – was one of a small group of people who protested outside the council’s chambers at County Hall.

Ms Kaluzyska, who has worked and lived in Limerick since 2005, said she, like others, took Cllr Keary’s comments as a “personal insult”.

“Yes definitely I did; I was very upset like most other people from Poland, and other countries living here, as well as Irish people.

“It’s not true what he said. I didn’t come here for social welfare, I came here to work and live.”

Currently unemployed, she added: “I was always a very hard worker. I’m a single mother, I was working, but I lost my job, and I am badly looking for a new one.”

“I’m not here for social welfare, definitely not.

“We have a petition signed by over 2,000 people that they don’t want him to be mayor,” she said.

Father of three, Derek O’Dwyer, from Raheen, who organised the petition, said: “I saw [Cllr Keary’s] comments and I was shocked. Like a lot of people here I was an emigrant myself; I know how hurtful it is to be somewhere else and to be disparaged by whoever is in power wherever you happen to be.

“I don’t think [his comments] are reflective of Limerick, I think it’s open, diverse, and wherever it is going in the future, it is going there because of the diversity it has now.”