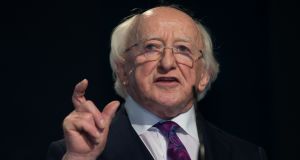 President Michael D Higgins: Will be uniquely qualified to commemorate the centenary of the Civil War in 2022. Photograph: Tom Honan for The Irish Times

By coincidence President Michael D Higgins will be inaugurated on Armistice Sunday – 100 years to the day since the end of the first World War.

The date is a timely reminder that we are still living with the consequences of the cataclysmic events of a century ago.

The Armistice commemorations mark the end point of the first half of the decade of centenaries and the beginning of the next, and potentially more divisive, half.

Though it hardly figured as an issue in the presidential election, setting the right tone for commemorating the War of Independence, partition, the creation of Northern Ireland and the Civil War will be critical in the years ahead. Each of these significant centenaries have the potential to reopen old wounds – especially in the post-Brexit world.

Few who have witnessed the President’s handling of the first half of the decade of centenaries doubt his passionate engagement or knowledge of Irish history, but the forthcoming centenaries present a whole new set of challenges.

In his victory speech on Saturday, Mr Higgins referenced one particular centenary event he believes should be marked: the democratic programme of the first Dáil, for many the lost manifesto of the Irish republic. It committed the fledging republic to an end to child poverty while the “right to private property must be subordinated to the public right and welfare”. The programme was quietly dropped by the first Dáil and never implemented.

The first challenging centenary commemorations will be the ones marking the War of Independence.

Before the presidential election, The Irish Times sent a detailed questionnaire to each of the six candidates about the decade of centenaries.

Both Joan Freeman and Sean Gallagher declined to state whether or not they believed the War of Independence was morally justified.

Mr Higgins believes the war was justified on the basis that the democratic mandate handed to Sinn Féin at the 1918 British general election for independence was ignored by the British government.

In a speech last April to mark the centenary of the death of the Irish Party leader John Redmond, the President stated: “The independence of our country was not, and I believe could not, be won by parliamentary manoeuvres alone . . . our own War of Independence was as necessary as any of those wars of national liberation fought by other peoples.”

In response to questions from the The Irish Times, Mr Higgins said, nevertheless, that Irish society should not be afraid to “openly discuss the nature of the atrocities committed and the ruthlessness of executions performed by the IRA”.

Recent research carried out by Dr Andy Bielenberg, a historian at University College Cork, reveals the old IRA disappeared almost four times as many people in Cork alone (62) as the Provisional IRA did throughout the whole of the Troubles (16).

Mr Higgins will be uniquely qualified to commemorate the centenary of the Civil War in 2022. The family divisions caused by that war were formative to his childhood experiences and the source of much personal anguish.

His father John was active in the War of Independence and then on the anti-Treaty side in the Civil War. On many occasions in the past, the president has spoken of how his father was excluded in the new State.

Mr Higgins’ 1990 poem Betrayal concludes: “Your face haunts me, as do these memories; and all these things have been scraped in my heart, and I can never hope to forget what was, after all, a betrayal.”

Michael D Higgins was born in 1941. At the age of five, he and his brother John were sent to live with his uncle Peter on the family farm in Ballycar, Co Clare. Peter Higgins took the pro-Treaty side and was an officer in the National Army which defeated the anti-Treaty side.

In an interview three years ago with this newspaper, Mr Higgins spoke of the divisions in his family that never healed.

“My father and my uncle were not antagonistic to each other but I just felt that a bond had been broken and I don’t think my father was ever able to fully recover it.”