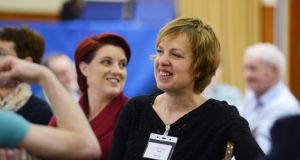 Ivana Bacik said she found it extremely moving, as she was sure her colleagues did, to watch the reports of the speeches given by Mr Higgins and the queen. Photogaph: Cyril Byrne

Ivana Bacik (Lab) said she found it extremely moving, as she was sure her colleagues did, to watch the reports of the speeches given by Mr Higgins and the queen. Real steps were being made in fostering warm relations between the two islands, she added.

“President Higgins paid his respects at the memorial to Lord Louis Mountbatten and the queen acknowledged in her speech later the discrimination suffered by Irish people in Britain in the past,” Ms Bacik said. “She also indicated the willingness of the British royal family to participate in the 1916 commemorations.”

Ms Bacik said they were now seeing major steps forward in the resolution of conflict in the North.

Mary White (FF) said Tuesday night’s historic banquet in Windsor Castle would pave the way for further momentous occasions. The biggest beneficiaries would be young people who would share the beauty of the peace process in years to come.

Ms White said the President’s performance showed that all citizens, young and old, had a contribution to make to society. Age did not matter: what counted was passion and commitment.


Gruelling programme
David Norris (Ind) said Ireland was lucky to have somebody of the intellectual distinction of President Higgins, who was undertaking a gruelling programme. “It is extraordinarily generous of the royal family to indicate that they will be here for the celebrations, if one can call them that, of 1916,” he said.

Jim Walsh (FF) said he hoped Mr Higgins would, on meeting British prime minister David Cameron, raise the issue of the victims of the Troubles, particularly those killed in the Dublin and Monaghan bombings, in Belturbet, “and various other atrocities that occurred here which involved British security forces”.