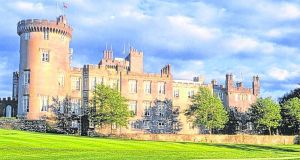 Dromoland Castle, Co Clare: The five-star hotel was included in a recent security sweep by Irish and US officials. Photograph: Rhona Cashman

The manager of the Co Clare hotel being considered for a possible meeting between the Taoiseach and Donald Trump next month said that officials preparing for the US president’s visit had checked the property.

Mark Nolan, general manager of the Dromoland Castle near Newmarket-on-Fergus, confirmed that the five-star hotel was included in a recent security sweep by Irish and US officials considering potential locations for a meeting between the two leaders.

“They were checking out most venues in the area,” he told The Irish Times.

The White House has yet to confirm that Mr Trump will visit Ireland as part of his European trip to the UK and France in the first week of next month, but detailed preparations are in train for the US president’s visit to his golf resort at Doonbeg, which is 50km from Dromoland.

Mr Nolan said nothing had yet been confirmed or booked with the hotel and that any meeting at less than a month away was unusually late notice for such a high-profile event and the demands it brings.

He admitted that there was not much flexibility in the hotel’s schedule but said that the hotel could accommodate the meeting and the accompanying security requirements.

“It would be a challenge for us, to be honest with you, but everyone loves a good challenge,” he said.

The Co Clare hotelier has experience of past presidential visits. He worked at Ashford Castle in Cong, Co Mayo in 1984 when then US president Ronald Reagan visited and was at Dromoland in 2004 when George W Bush stayed and met taoiseach Bertie Ahern at the Co Clare resort.

“Generally speaking there is a much longer lead-in time, so this would be very rare,” he said.

“Normally speaking, when I was handling the Bush visit planning started approximately four months prior because I had to negotiate with group bookings to relocate or find alternative arrangements for people who were already booked, so that timeline doesn’t exist if it is to happen here.”

He recalled a heavy security detail at Ashford for Reagan’s visit that included divers in Lough Corrib and the adjoining river checking nets installed to prevent an incendiary device being floated towards the castle.

Mr Nolan said he had no concerns that the US president might be impressed enough with Dromoland to encourage the Trump Organisation to add the property to its portfolio.

“He’d want to have a big chequebook. We have high aspirations for our property,” said Mr Nolan, referring to the hotel’s recent €20 million refurbishment.