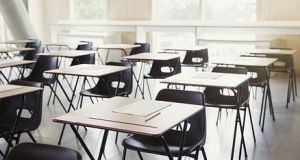 When asked if the Leaving Cert assessed their intelligence fairly, 80% of students surveyed responded No. Photograph: Getty Images

More than half of Leaving Cert students have developed mental or physical health issues as a result of exam pressure, a survey of nearly 2,700 students has found.

Some 75 per cent of those surveyed reported suffering “extreme” stress over the course of the two-year Leaving Cert cycle.

The survey, conducted by Studyclix which is an online resource for second-level students and teachers to help with exams, was conduced across the State last week.

For most students anxiety is the chief issue (71 per cent), while weight gain (47 per cent), insomnia (35 per cent), depression (28 per cent) and weight loss (15 per cent) have impacted negatively on young people’s health.

It also found 53 per cent of school teens spend more than three hours on their smartphones every day, which may also be contributing to stress levels.

A third said they scroll for four hours or more, with Snapchat being the most popular social app among 90 per cent of second-level students.

“The rise in the amount of time that students are spending looking at their phones and looking at social media may be another contributing factor in the amount of stress and anxiety being experienced, alongside the obvious pressures of the Leaving Cert,” said second-level science teacher and Studyclix co-founder Luke Saunders.

The survey also found the volume of exams was taking a toll on students as some 37 per cent said they would prefer to be graded by more continuous assessment.

Despite the pressure of a compact exam period, 80 per cent of students would not like their exams to be spread further apart.

“A simple change would be to lower the number of subjects counted for CAO points calculations from six to five, meaning that students would be able to take one less subject, leaving more space in the timetable for the likes of physical education, career guidance and health and wellbeing classes,” said Mr Saunders.

When asked if the Leaving Cert assessed their intelligence fairly, 80 per cent responded No.

Many took issue with the points-based system, with nearly 70 per cent feeling it would not help them follow their desired career path.