Search called off after man drowns in Wicklow river

Two helicopters and up to 80 search and rescue personnel, including units of the fire brigade, civil defence and gardai were involved in a search of the Avoca river at Arklow in the early hours of this morning, after concern was raised for a number o 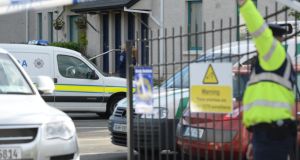 Gardai at the scene at Marina Village in Arklow this morning. Photograph: Cyril Byrne/The Irish Times

One man drowned and a second survived after falling into a Co Wicklow river in the early hours of the morning.

Two helicopters and up to 80 search and rescue personnel, including units of the fire brigade, civil defence and gardai were involved in a search of the Avoca river at Arklow in the early hours of this morning, after concern was raised for a number of people.

The search operation has now been called off after gardai confirmed that just two people - not four as first thought - had entered the river .

It is understood that a group of people who were socialising in the Marina Village apartment complex entered the water in vicinity of floating jetties.

Gardai and rescue services were alerted at about 4am after reports that at least two people, understood to be men in their 40s - one from Scotland the other from Poland - were in difficulties.

The Garda helicopter and the Sikorski air and sea rescue helicopter rushed to the scene as did units of the local fire brigade and civil defence, as well as members of the local sailing club and the RNLI.

A man was taken from the water and was given first aid but was later declared dead and removed from the scene shortly before 8am.

Gardai have sealed off an an apartment in the Marina Village complex which is located on the north quay of the Avoca river, close to the Bridgewater shopping centre.

Residents in the Marina Village expressed shock as they awoke to the large scale search outisde their windows. One man said the man taken from the river in the early hours had appeared to be initially talkative before he was later declared dead.

A number of shoppers at the Bridgewater shopping centre expressed concern that large parts of the quays are unprotected and a number of vehicles have entered the water there in recent years.

Jimmy Tyrell, operations manager of Arklow RNLI, said his volunteers in RNLI and sailing club ribs were involved in the search until it was stood down at about 8am. “Conditions were good this morning,” he said. “It was a fine morning, calm with little or no wind.”