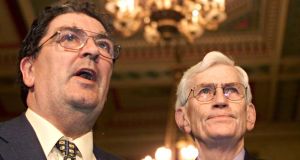 Seamus Mallon and John Hume were the two big beasts of the SDLP. While both men represented the heart and soul of the party, Mallon also was its guts and backbone. He was a righteous, occasionally cantankerous and crusty warrior who fought the good fight to the last.

Formidable, intelligent and wise, both men were at the centre of the civil rights movement and at the creation and development of the peace process, from the sabotaged Sunningdale powersharing Executive of 1974 to “Sunningdale for slow learners” – to use Mallon’s famous phrase – also known as the Belfast Agreement of 1998.

But they were different characters and they had their differences.

Mallon liked to tell a story, and he recounted it too in his autobiography written with Andy Pollak, A Shared Home Place, that captured that dissimilarity.

It came from the late Paddy Duffy, another stalwart of the SDLP, who once said that Hume was becoming like Jesus Christ – “he will be walking on water soon”.

Then Duffy looked at Mallon, who enjoyed the quip, and added, “And you Mallon, you’ve become like John the Baptist, wandering about in the desert and living on locusts and wild honey.”

There was figurative and also almost literal truth in that description that played into the sometimes difficult nature of the relationship between Hume and Mallon. In 1979 respectively they became the leader and deputy leader of the SDLP.

At that time Hume was an MP and MEP “swanning about”, as some have described it, Washington, New York and Brussels drumming up support for powersharing from the great and the powerful, from the likes of the so-called Four Horsemen, Senators Edward Kennedy and Daniel Moynihan, US House of Representatives speaker Tip O’Neill and New York governor Hugh Carey, and making friends with successive US presidents, Jimmy Carter, Ronald Reagan and Bill Clinton.

While Hume was feted internationally, back home Mallon, who had given up his teaching job, was doing the difficult donkey work of trying to hold a party together and give it a sense of purpose while there was no real politics and for most of the time no Stormont administration and therefore no money. Mallon for much of that period had to depend on the salary of his late wife, Gertrude, a nurse.

Hume’s work was vital in building up that influential international support that was so important in the 1990s for the three-stranded peace process that he had largely devised, and that finally came to fruition on Good Friday 1998.

Hume too, of course, attended his sad share of funerals but Mallon had to take the lead in Northern Ireland, walking behind the coffins, campaigning for political progress, sticking it into the IRA and the loyalist paramilitaries, complaining about British state collusion and the alleged shoot-to-kill policy of the RUC in the early 1980s.

Hardly surprising then that wearily as he drove home through the dark Murder Triangle roads of Mid-Ulster that he might have nursed occasional bouts of resentment against globetrotting Hume.

Political and personal life improved when in 1986 Mallon finally won a House of Commons seat for Newry and Armagh. But here too the distinctions between the SDLP leaders were apparent.

Hume generally hated the place, viewing Westminster as a waste of space as regards his greater and longer ambition of fashioning a deal to bring an end to the violence. Mallon, the ex-teacher, the amateur actor, the writer of a play that won an All-Ireland amateur drama one-act play award, on the other hand was in his element.

As the SDLP’s most eloquent politician he loved the theatre of the British parliament, the cut and thrust of debate, the interventions, the points of order, the social aspect of the Palace of Westminster and the respite for a few days each week from the continuing Troubles horror back in Northern Ireland.

He will be looked upon as in the O’Connell, Parnell league

Mallon, whose portfolio was justice, security and policing, also acknowledged that he could be “harsher-toned” than Hume, but that was because back in the 1980s he was more in the frontline – on the “battleground”, as he called it – of brutal daily life. “My voice had to be hard when describing the killing of my neighbours. If I had started to whisper that ugly truth it would not have been heard,” he wrote.

Mallon also was greener than Hume who once spoke about a “post-nationalist Ireland”. There was nothing post-nationalist about the Markethill man; he wanted a united Ireland but one only achieved by peaceful means.

He despised the IRA and their “murderous methods” and that was a key issue between himself and Hume, particularly during the early 1990s, the time of the secret Hume-Adams talks and the lead-up to the first IRA ceasefire of August 1994.

One of his biggest issues with Hume was that the SDLP leader did not keep him in the loop. In his autobiography Mallon acknowledged that Hume “was a remarkable genius” but that he was “very much a loner in his political life, reluctant to keep the party informed about matters important in the development of its strategy and policies”. With the SDLP’s tendency to leak stories that was understandable but still it created tensions.

The chief division in this instance was that while both Hume and Mallon wanted the peace, the deputy leader did not want it at the expense of the SDLP. Mallon believed that Gerry Adams and Sinn Féin were exploiting “Hume’s standing in Ireland and internationally” and that the SDLP was suffering – as indeed it was, the peace finally helping Sinn Féin overtake the SDLP as the main representative of nationalism.

Hume, who worked to a long view, believed an end to the killing was worth treating with Sinn Féin and the IRA even if ultimately it meant the relegation of the SDLP. Mallon believed that with other tactics both the peace and the salvation of the SLDP could have been achieved. Was there any other way? Ultimately that question is for historians and others to decide.

But Mallon always insisted that they had regard for each other even if it was sometimes grudging, and that some of the stories of their arguments were exaggerated. “We had rows, but we never had a decent row,” he told The Irish Times four years ago.

Behind all the spats and the edginess theirs was a long-standing vital alliance of two of the biggest men of modern non-violent nationalism.

In the same interview the big-hearted nature of Mallon came across. Asked what he thought of Hume’s place in Irish history, Mallon could have equivocated but he was too honest and generous a man for such pettiness.

“He will be looked upon as in the O’Connell, Parnell league,” he said.

And would he give him that?

“I would because I know him probably better than most, and his capacity was something remarkable.”

At the end of the day there was affection and respect between them, like testy old soldiers who together had come through the hardest of battles.