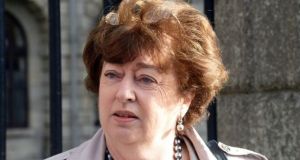 Deputy Catherine Murphy, co-leader of the Social Democrats, said the Official Secrets Act as currently framed is at odds with the culture of whistleblowing. File photograph: Cyril Byrne

An American-style Oireachtas committee vetting process for senior appointments to public bodies should be introduced, the Social Democrats have suggested.

The party has proposed that ministerial discretion in making major appointments should be limited and the process should be more open and transparent as a result.

In the United States senior appointments such as judges, heads of federal agencies and ambassadors have to be scrutinised at the committee stage in the Houses of Congress.

The party has also proposed an independent anti-corruption unit to tackle white-collar crime.

A ban on meetings without minutes, reform to the Official Secrets Act and making government officials accountable for decisions made are all contained in the party’s document Honest Politics.

It suggests “inadequate governance and accountability systems are at the heart of cost overruns involving massive amounts of public resources that could be spent elsewhere”.

Co-leader Catherine Murphy said the issue of honesty in Irish public life comes up after scandals, but lessons are not learned.

She said €500 million has been spent to date on various tribunals investigating aspects of Irish life.

Ireland, she suggested, cannot afford not to set up an anti-corruption unit with real teeth.

She maintained the Official Secrets Act as currently framed is at odds with the culture of whistleblowing.

“We need people to come forward in relation to wrongdoing or malpractice,” she said.

She suggested that all meetings involving public money and public decisions should be minuted.

“You can’t have accountability without transparency without keeping a record of how decisions are made.”

The party is proposing that the Ministers and Secretaries Act be reformed to make senior civil servants accountable for their actions.

The party has also proposed the establishment of an Irish Electoral Commission to be headed up by a chief electoral officer of Ireland. He or she would administer all elections and referendums in Ireland.

Politicians would have to declare all significant liabilities as well as assets and salary top-ups for committee chairpersons and whips would be abolished.

Ms Murphy said a more transparent expenses process for TDs and senators will be needed. The party has two TDs in the outgoing Dáil, Róisín Shortall and Catherine Murphy and is targeting between five and eight seats.