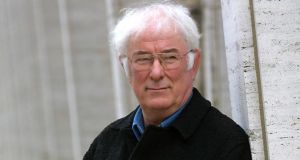 In what is believed to have been his last formal interview, with the French-language Revue de Belles-Lettres, during his trip to Paris in June, Seamus Heaney spoke of “journeys to the underworld” in Homer, Virgil and Dante. “The potency of the myth” was, he said, “a way of imagining something ongoing.”

Heaven and hell have little meaning for most people, Heaney continued. “Christian myth is so contentious and exhausted... I find that there were underworld journeys where the shades of the people you knew are met. I find it deeply, archetypally satisfactory. You don’t need to believe in an ‘afterlife’ but you get some kind of satisfaction... I find Virgil simply beautiful, the various encounters with the lost people.”

When Louis-Philippe Ruffy, who conducted the interview, learned of Heaney’s death, “All of a sudden, there was an unsettling connection between Aeneas, who goes to find his father in the underworld, and the poet’s relationship with his own, silent father. In my mind, I see the poet finding his father again.”

Heaney also spoke of his attachment to the earth. “I think that I am basically a ground person, you know, if it came to which element... I am sedimentary. That comes out earlier on, I think with poems like Bog Land, which is about going down and down and finding origin there.”

The bog
So many exhibits in the National Museum of Ireland have labels saying “found in a bog”, Heaney noted. “I thought, that’s an image for consciousness in this country. I contrasted the bog land, which is about remembering downwards, with the American myth of themselves, which is the prairie going outwards.” Heaney also described his progression as a poet, since the publication of his first collection, Death of a Naturalist, in 1966. As a young poet, he said, “you aren’t thinking really of the function of poetry; you’re thinking about the making of a poem.” Events in Northern Ireland forced him to ask “how responsive to the conditions of the world ought the poet to be. How much of an answer to the world you’re in is required.”

Over two decades, Heaney said he shed anxiety and was “trusting lyric impulse and freedom and imagination”. He moved “from concern with making a poem to concern with what is the obligation to the world you live in, to saying ‘to hell with it, just write lyric poetry’”. He believed he had remained in “that kind of absolved condition”.

It took Ruffy and Marion Graf, the director of La Revue de Belles-Lettres, more than a year to obtain the Heaney interview. The RBL is published twice annually. The issue on Heaney will come out in November and will be available through the review’s website, larevuedebelleslettres.ch. Only four of Heaney’s books have been translated into French, but Graf hopes the review will “clear the way” for more.

Paris interview
Ruffy had dreamed of interviewing Heaney for nearly two decades, but it was the publication of Human Chain in 2010 that made Ruffy and Graf determined to meet him. The interview was organised by Sheila Pratschke, the outgoing director of the Irish College, and took place at the Irish Ambassador’s residence in Paris.

“Throughout Human Chain, there’s this idea that we are linked,” Ruffy says. “I see Heaney’s death not as a rupture or a break. I dare to hope that these texts will continue to create ties between people. If you go back to the poems, he is there, and the link is still there. It hasn’t been broken.”