SDLP disappointment and fear of return to polarisation 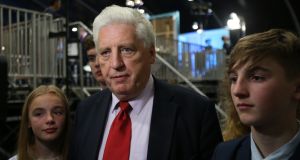 There was no disguising the sadness in Seamus Mallon’s voice. “I am very, very disappointed and very sorry for good MPs who have lost their jobs,” he said of the collapse of the SDLP at Westminster.

Over decades he had soldiered, and occasionally fought, with the three politicians who lost out – Mark Durkan in Foyle, Margaret Ritchie in South Down and Alasdair McDonnell in South Belfast – and he felt for them at a personal level.

But he had a darker worry that Northern Ireland now is a polarised society straying away from the “cross-community ethos” of the Belfast agreement.

“We now have a supremacy of two political parties, none of which properly believes in the (Belfast) agreement or the fundamental issues which it addressed,” he said. “What we have are two silos instead of one society. It is a form of Balkanisation which should be frightening for everybody on this island.”

Twenty years ago Mr Mallon was one of three SDLP MPs in the House of Commons; the other two were John Hume and Eddie McGrady. That year the party won 191,000 votes in the Westminster election. On Thursday it won 95,000.

The following year after the Belfast Agreement it returned 24 members to the new Northern Assembly. Now it has no MPs, 12 Assembly members and no money in the coffers to begin a proper restructuring.

The DUP has 10 seats and huge leverage with the Conservative government while Sinn Féin has seven seats and through abstentionism no leverage.

Hardly surprising therefore that Mallon should be so despondent. It is not sour grapes, he asserts. “I respect the right of the electorate but there is more to politics than power and the advantages that flow from it.”

He said that to their mutual benefit Sinn Féin and the DUP used the election as a proxy Border poll on a united Ireland.

“By creating the context for that Sinn Féin have sectarianised the political process after 40 years of the development of a political philosophy and structures to create an inclusive community in the best interests of all.”

Mallon was dismissive of Sinn Féin’s argument that little or nothing can be achieved in the House of Commons. He said that from the green benches and in the Westminster committees the SDLP nailed down a policing service acceptable to nationalists, tempered the edges of the emergency terrorist legislation and fair employment legislation.

As for any hope of a resurrection, “It will be difficult, let me put it that way. But we are not going away.”

He is 80 now and that job will be for younger generations. Finding a little heart he said there are good people in the party who might find the will and energy such as party leader Colum Eastwood and MLAs such as Daniel McCrossan, Nichola Mallon and Claire Hanna.

Voice of the electorate

At the weekend Eastwood said he has accepted and will listen to the voice of the electorate. “We will not rush into any kneejerk reactions but nor will we be slow in doing what is required,” he said. “As a party there are no questions we will not be prepared to face.”

The only really big idea is for the party to formally hook up with Fianna Fáil to match Sinn Féin as an all-Ireland party. That proposal, which prompts differing views within the SDLP, will be developed in the weeks and months and come.

The SDLP describes itself as “proudly pro-life” but in the period ahead there will be some pressure for it to soften its position, to permit abortion in cases of fatal foetal abnormality and rape and incest. Party sources said that during the election campaign it got “quite a savaging” on social media from pro-choice advocates. That will be a difficult internal debate too.

Hanna, a South Belfast MLA seen as a future party leader, said the difference between Sinn Féin and the SDLP is that while the SDLP “always has aspired to Irish unity it has always prioritised reconciliation and stability” above that ambition.

She said the SDLP was not going away and that Foyle and South Belfast could be retaken in the next Westminster election which could come sooner rather than later. “I can’t say there is not hope for the SDLP but there isn’t hope for the SDLP unless we do something very dramatic.”