Schools and businesses may stay closed after unprecedented snowfall

From skiing in Tramore to snowballs in Cork, Irish people uploaded thousands of videos onto social media, here are some of the best. 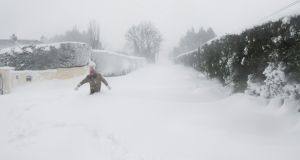 Unprecedented snowfalls in parts of the country have raised serious concerns that the effects of Storm Emma may force the closure of hundreds of schools and businesses on Monday.

Despite hopes that the worst would have passed by Friday night, Met Éireann extended its red snow-ice warning for counties Dublin, Kildare, Wexford, Wicklow and Meath until 9am on Saturday.

The chairman of the National Emergency Co-ordination Group, Seán Hogan warned that “extraordinary levels” of snow were expected during the day.

In parts of the country some roads have been left impassable as snow is falling faster than roads can be gritted, while the southeast has particularly badly hit, where some villages and homes could be cut off for days.

Emergency departments around the country are expecting a post-storm surge in patients, once Storm Emma’s hazardous snow and ice conditions begin to subside.

Hospitals have been treating fractures, dislocations and other injuries following “trips and slips”, the number of patients is down as people heeded warnings to stay at home.

The Health Service Executive has cancelled all non-urgent surgeries planned for Saturday. It says there is no need for patients to contact their hospital as they will be in touch over the coming weeks to reschedule appointments.

The storm’s lingering effects have delayed a planned resumption of transport services. More than 50 Aer Lingus flights have been cancelled this morning, affecting almost 10,000 passengers.

Ryanair has also cancelled flights into and out of Dublin Airport. No trains will run before midday on Saturday at the earliest, with Irish Rail saying the extended red alert requires staff safety and line clearance to be prioritised.

However, Bus Éireann said it may be able to resume services in some parts of the country on Saturday, dependent on road conditions. And Dublin Bus expects to operate services, though disruptions will affect frequency and diversions will be in place.

Flooding is now a threat depending on the speed of the thaw, though Jim Casey of the Office of Public Works said river levels had fallen over the past two weeks.

However, there is a danger of sudden rises especially in small, steep, mountainous catchments. “And we’re advising the public and farmers to stay clear of rivers and water courses.”

There was localised flooding in the Dún Laoghaire-Rathdown area and parts of north Dublin “there is potential in Wicklow also for some similar localised coastal flooding” on Saturday.

He appealed to the public to stay away from coastal areas for two hours either side of high tide.

In Wexford town the Defence Forces were called in to assist ambulance services who could not get out from their base.

“We’ve experienced serious difficulty in trying to access patients who’ve made 999 calls,” said Tom McGuinness of the HSE. “We’ve also had difficulty around the ambulance base in Wexford town.”

“The snow plough could not get access to clear the ambulance base and the hospital because cars that went out in the bad weather blocked access for the ploughs.”

About 30,000 customers remained without electricity last night, mainly in Wexford. ESB networks on Friday had 30,000 customers with power cuts but 80 per cent or 25,000 had been restored but since then another 25,000 homes in the Wexford area suffered power outages, so overall numbers remained static.

“There is a conveyor belt of precipitation which is sleety snow pushing up along the east coast and very heavy in to Wexford, Wicklow and Dublin and Meath.”

The best guidance is that the snow will “fizzle out” on Saturday with Cork, Kerry and perhaps Waterford expecting up to 5 degrees resulting in gradual melting of the snow.

Crime levels have dropped over the last few days, though a Lidl store in Fettercairn in Dublin was looted by a gang of 30, who broke in and stole supplies of alcohol.