May vows to work with EU to avoid hard Irish Border 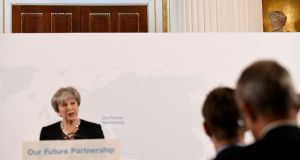 British prime minister Theresa May said she believes a broad and deep free trade agreement will be achievable between Britain and the EU. Photograph: Getty Images

British Prime Minister Theresa May has vowed not to let Brexit “set back” the historic peace secured in Northern Ireland and to work with the EU to avoid a hard border in Ireland.

In a much-anticipated speech on the UK’s plans for a future agreement with the EU, the Conservative leader committed her government to finding a solution to the dilemma around Britain quitting the EU’s single market and customs union in March 2019 without imposing restrictions on the Irish Border.

She reiterated that her Government had been clear all along that the UK did not want a hard border in Ireland and have ruled out any physical infrastructure or any Border-related checks and controls.

“But it is not good enough to say, ‘we won’t introduce a hard border; if the EU forces Ireland to do it, that’s down to them.’ We chose to leave; we have a responsibility to help find a solution,” she said.

“But we can’t do it on our own. It is for all of us to work together.”

Her remarks were a rebuke to hard Brexiteers in her own party, including hard Eurosceptic Jacob Rees-Mogg who have argued that the Northern Irish border is a problem for Ireland and the EU, not Britain.

Mrs May’s speech struck a more conciliatory tone following angry political exchanges this week after she rejected the European Commission’s draft legal text on a Brexit treaty as unacceptable because it would effectively keep Northern Ireland under EU customs rules and put the EU-UK border in the Irish Sea.

She acknowledged that Brexit causes “very particular challenges” for Northern Ireland and Ireland and so it is “not surprising that our decision to leave has caused anxiety and a desire for concrete solutions.”

Yet she repeated her opposition to the plan under the EU’s draft treaty text published on Wednesday that Northern Ireland would remain under EU customs rules under the so-called option C proposal.

“Just as it would be unacceptable to go back to a hard border between Northern Ireland and Ireland, it would also be unacceptable to break up the United Kingdom’s own common market by creating a customs and regulatory border down the Irish Sea,” she said.

Mrs May stressed her intention to protect the Irish peace process in the Brexit process, yet at the same time said that “no-one should be any doubt” about her government’s commitment to the December political agreement between the EU and the UK which contained option C as a fall-back possibility.

“As prime minister of the whole United Kingdom, I am not going to let our departure from the European Union do anything to set back the historic progress that we have made in Northern Ireland - nor will I allow anything that would damage the integrity of our precious Union,” she said.

The British leader’s commitment to the December deal was questioned after she strongly opposed the draft treaty text which Brussels and Dublin said simply put into operation that political agreement.

In her speech, Mrs May appeared to signal that the UK wanted to broker a bespoke agreement lying somewhere between the two other options set out in the December agreement: option A, a future EU-UK free trade agreement, and option B, a specific solution for Northern Ireland proposed by London.

In her speech at the Mansion House in the City of London, she said the UK wanted an agreement on customs that would create as “frictionless a border as possible” between the EU and the UK and would avoid a hard Irish border.

She proposed two options: a customs partnership or “a highly streamlined customs arrangement.”

Under the first, at the EU-UK border, the UK would mirror EU rules for imports from the rest of the world, applying the same tariffs and rules of origin as the EU for goods arriving in the UK and intended for the EU.

All goods entering the EU through the UK would pay the correct EU duties, removing the need for customs checks at the border.

“But, importantly, we would put in place a mechanism so that the UK would also be able to apply its own tariffs and trade policy for goods intended for the UK market,” she said.

This would enable the UK agree trade agreements with third party countries, a key objective for the UK government post-Brexit.

Under the second option, the EU and UK would “jointly agree to implement a range of measures to minimise frictions to trade, together with specific provisions for Northern Ireland,” she said.

She suggested specific measures for Northern Ireland, saying that smaller traders, who make up 80 per cent of north-south trade, would be able to continue to operate “with no new restrictions.”

For larger traders, “streamlined processes including a trusted trader scheme” would be introduced.

“I recognise that some of these ideas depend on technology, robust systems to ensure trust and confidence, as well as goodwill, but they are serious and merit consideration by all sides,” she said.

She said that agreement on these terms could be reached through a commitment to ensure that the relevant UK regulatory standards “remain at least as high as the EU’s and a customs arrangement.”

Mrs May set out “five tests” for a Brexit deal with the EU including a requirement that any agreement would strengthen the United Kingdom.

Rejecting existing EU arrangements with Canada and Norway as models for a post-Brexit EU-UK deal, she said she wanted to “look beyond the precedents, and find a new balance.”

She said that the UK government wanted “broadest and deepest” possible partnership with the EU “covering more sectors and cooperating more fully than any free trade agreement anywhere in the world.”