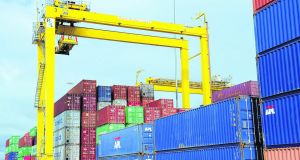 Lorry drivers faced hours-long delays at the port over recent days after Dublin Ferryport Terminal was closed for two days following the death of a truck driver. Photograph: Aidan Crawley/Bloomberg

Health and safety changes introduced at Dublin Port following the accidental death of a haulier last week have led to major delays for hauliers and freight operators entering the country’s busiest port.

Lorry drivers have faced hours-long delays at the port over recent days after Dublin Ferryport Terminal was closed for two days last week following the accident.

Since then, drivers have faced further delays due to the introduction of health and safety procedures and induction for drivers entering the terminal.

Father-of-four Nicholas “Nicky” Collier, a Dublin truck driver, died last Wednesday when he was struck by a container-handling machine as he was checking a refrigerated unit.

His death has led to two investigations, by the Garda and the Health and Safety Authority (HSA), leading to the closure last week of the busy ferry terminal, which is owned by Irish Ferries operator Irish Continental Group.

Since then, the terminal has revised and updated safety induction for drivers entering the facility, which has thousands of drivers registered with cargo cards allowing them access onto the terminal.

Verona Murphy, president of the Irish Road Haulage Association, said the changes in health and safety procedures had led to “wicked delays” of five or six hours and “absolute mayhem” as drivers were reaching their regulated hourly driving limits and trucks were stuck in the port.

“If this doesn’t tell people that Dublin Port has over-run and exceeded its limits, then I don’t know what does and Brexit hasn’t even occurred yet,” she said.

“I don’t know where the traffic is going to go when Brexit happens.”

Drivers being delayed in holding areas is leading to fears that this congestion could be a harbinger of delays at the port arising from a no-deal Brexit when the UK is due to leave the EU at the end of October.

Eamonn O’Reilly, chief executive of Dublin Port Company, said the port received no notification of the HSA closing the terminal for 30 minutes on Tuesday and that 30 or 40 trucks were unable to move within the port resulting in a backlog out of the port up to the port tunnel.

Mr O’Reilly said the port had assigned almost 25 acres of space to Brexit-related infrastructure which had reduced “almost all of the buffer capacity” within the port to handle congestion issues.

He did not believe the delays of recent days were a sign of potential delays to come from Brexit as most of the delays from the UK’s exit would arise on the import side, on goods arriving from Britain.

“It is only a foretaste of what Brexit could bring if the import side became so bad that the trucks couldn’t get out of the terminal when they arrive from the UK,” he said.

“I am not saying it is an impossible scenario but I don’t see it happening.”

A spokeswoman for the Dublin Ferry Port terminal said its subcontractor operating the terminal was “re-inducting all hauliers on the health and safety procedures before they are allowed to re-enter the terminal”.

“When this process is completed, we expect operations on the terminal will return to normal,”she said.