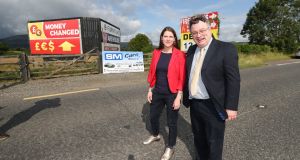 Liberal Democrat leader Jo Swinson has said there is no “good Brexit” for Northern Ireland.

On her first visit to the Border between Northern Ireland and the Republic, the new party leader said it was still possible to stop the UK leaving the European Union.

She travelled to a part of the Border between Co Armagh and Co Louth to meet community representatives and young people living in the area.

She also met Alliance Party deputy leader Stephen Farry who spoke to her about the dangers of a hard Brexit.

“I felt it was important to come and listen to people and community groups about their experiences and about what the prospect of a hard border means to the communities,” Ms Swinson said.

“It’s very powerful hearing from those individuals who live and work in this area. The Liberal Democrats have been very clear in our position – we think that Brexit is bad. There is no good Brexit for the UK and that includes Northern Ireland.

“We have been fighting for there to be no border here where I am standing and the way in which that has operated successfully for years now has been as members of the European Union and we are still members of the EU and it is still possible to stop Brexit.”

She said she recognised that for communities there the backstop is an important insurance policy.

“But the best possible outcome is to have Northern Ireland and the Republic of Ireland both within the EU so that we can have a strong UK, in a strong EU so communities can live, work and go about their daily lives without the hassle of a hard border and without all of the downsides for our economic prosperity that will ensue if we do go ahead with Brexit,” she said.

She called on Boris Johnson and Michael Gove to visit the Border and listen to people living and working in the region.

Ms Swinson also said she was “not surprised” Mr Johnson took almost a week to contact Irish premier Leo Varadkar after he was appointed.

“He was perhaps our worst-ever foreign secretary and does not possess the skills or diplomacy that was required for that role so we shouldn’t be shocked that, in the role of prime minister, he is also not demonstrating that statesmanlike approach that ought to be needed,” she added.

“His actions have been driven by what is best for Boris Johnson. He’s wanted to be prime minister for so long that he is prepared to say anything, including contradictory things to different people, that it would take for him to get that role.”

Doire Finn, co-founder of Our Future Our Choice NI, a cross-community youth group, was among a small group of young people to meet Ms Swinson.

She highlighted some of the concerns young people had about Brexit.

“We visit schools and a lot of people, particularly in Border areas, are asking will I see my family, will I be able to go to school, will I go on a night out? And it’s simple things that are being ignored and overlooked which are a part of everyone’s life,” she said.

Aaron Hughes from Belfast said young people were worried about public transport and being able to visit friends who live in different communities.

“I was born post-Good Friday [Belfast] Agreement so I’ve never seen conflict and now we are here at the Border and there’s nothing here so it shows the progression we have made in the last 20 years,” he said.

“It’s the little things that hit people the most.” – PA