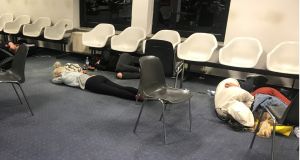 People attempted to rest on the floor 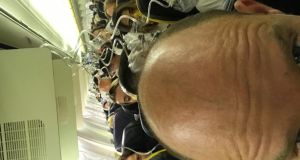 The crew deployed oxygen masks and initiated a controlled descent 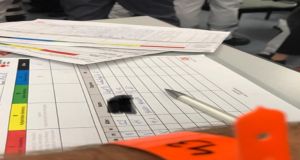 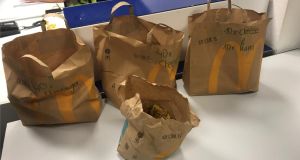 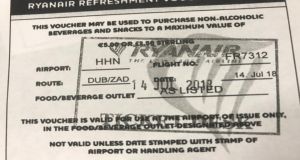 Meal vouchers were given out at 4.30am

Ryanair passengers have accused the airline of minimising the seriousness of an emergency landing which caused dozens of injuries on Friday.

Ryanair flight FR7312, due to fly from Dublin to Zadar, was forced to make an emergency landing at at Frankfurt-Hahn airport in Germany on Friday night after a depressurisation in the cabin.

The sudden loss of cabin pressure forced the pilot to descend from 37,000 to 10,000 feet over a seven-minute period.

Several passengers suffered burst eardrums during the rapid descent while others had severe headaches and nausea.

In a statement Ryanair said: “The plane landed normally and customers disembarked, where a small number received medical attention as a precaution.”

Frankfurt police said 33 of the 189 passengers were taken to hospital complaining of headaches and earaches and suffering from nausea.

Passenger Barry Holden told The Irish Times by email he was the 43rd person to be treated by the German Red Cross after landing.

“How many were registered after me I’m unaware. However, a quarter [of the passengers] is not a ’small’ number in my mind,” he said, accusing Ryanair of “careful downplaying of events”.

“It’s not a precaution if your ears are bleeding or you have pain,” said Minerva Galvan, an Irish-based Spanish student who was flying to Croatia with her boyfriend.

After the plane landed passengers not hospitalised had to stay overnight in a military airport terminal.

“Customers were provided with refreshment vouchers and hotel accommodation was authorised, however there was a shortage of available accommodation,” the airline said in a statement.

Passengers, including babies and young children, slept in military-style camp beds or on the floor in the airport with many complaining there was not enough food or water.

Mr Holden said staff told passengers the cost of their onward journey would not be honoured and if customers tried to find their own accommodation they would not be reimbursed.

He said he checked online and found family rooms available nearby from €43. “When requesting a representative from Ryanair, customers were told there was no one from Ryanair. They abandoned us in a US military base, in Germany. A stylish insult to injury.”

At the base, passengers were provided with about 100 McDonalds’ hamburgers, and a bag of Haribo jellies, to feed the 150 remaining passengers

They were later given a €5 food voucher and told they would have to pay for anything else themselves.

Passenger Keiran Blunt told The Irish Times on Saturday: “The children here have been left without water, they’ve had no lunch provided to them.

“There was a newborn baby on board, a few months old, and I had to steal water from a fridge here in Frankfurt just to provide the family with some water.

“There’s young lads between 9 and 12 who’ve been given nothing with any nutritional value. We were let sleep here on a cold, concrete floor.”

Ryanair scheduled a replacement flight for 9.40am on Saturday which was delayed for 90 minutes.

The delay was caused by difficulties in matching the luggage to the passengers. Staff were forced to hold up pieces of luggage on the plane so passengers could identify which belonged to them.

Passengers who had suffered ear injuries could not fly for medical reasons, with some told they would not be able to fly for at least a week.

As a result 19 passengers had to take an 18-hour bus journey to their destination in Croatia.

The bus arrived at Zadar shortly after 1am on Sunday morning. “End of the journey. We arrived about 2 hours ago to Zadar. We are all good. Thank to all the people who supported us during these days,” Ms Galvan tweeted.

While Ryanair’s treatment of passengers once they landed has been criticised, there was praise for how the pilot and crew handled the incident.

This afternoon, in response to queries from The Irish Times, a Ryanair spokeswoman said all passengers have received a full refund and a free flight voucher.

The passengers who were bussed to Zadar also received €200 to cover meals and incidental expenses.

“We have contacted the five remaining customers who did not travel on the flight or coach and we will provide them will any assistance they require,” the spokeswoman said.

“We are fully assisting the German authorities with their investigation and until this process has been completed, we will not be making any further comment.”

German authorities have contacted the Irish Air Accident Investigation Unit (AAIU), informing them that they have opened an investigation into the incident. It is understood a formal notice of the investigation will be issued on Monday.

As the incident happened in Germany, the investigation will be handled by the German Federal Bureau of Aircraft Accident Investigation (BFU).

The aircraft, a Boeing 737-800, is registered in Ireland meaning the AAIU will assist, “as required”, a Department of Transport spokesman said.

“Initial contact has already been made by the BFU. The AAIU will remain party to the investigation until completion of the Final Report."

An Irish pilot with experience of flying the aircraft said it appears likely the cabin depressurised sometime into the flight, probably due to a mechanical malfunction.