Ryan Tubridy getting checked out for ‘persistent cough’ 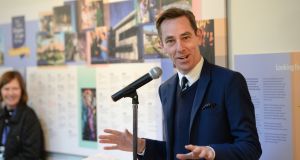 RTÉ presenter Ryan Tubridy is getting a “persistent cough” checked out by his doctor, the national broadcaster has confirmed.

Tubridy did not present his usual 9am RTÉ show on Wednesday.

He was replaced by Oliver Callan who said the Late Late Show host was getting checked out after suffering from a persistent cough in recent days.

An RTÉ spokeswoman confirmed that Tubridy was seeing a doctor about his cough but would not say whether the presenter was getting tested for the coronavirus.

She could not confirm whether Tubridy would return to presenting his regular slot on Thursday.

Ealier this week current affairs presenter Claire Byrne confirmed that she had tested positive for Covid-19.

Byrne has co-hosted her Monday night television show from her garden shed for the past fortnight. Initially she told viewers she simply had a head cold and possible chest infection but did not have a temperature.

However, on Monday she described her shock at discovering she had contracted the coronavirus. Byrne contacted her RTÉ colleagues by email saying she was “well now and through the peak of the condition”.