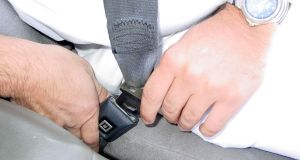 The RSA said that while about 94 per cent of road users wear seatbelts, the cohort failing to tend to be young people.

Road collision statistics suggest that alcohol consumption is a major reason why some road users are failing to put seatbelts on after getting into vehicles, the Road Safety Authority has said.

The latest figures show there have been 34 deaths on Irish roads since the start of the year, a rise of nine – or 36 per cent – on the same period last year.

Chief Supt Paul Cleary of the Garda National Roads Policing Bureau this week said he was “surprised” that in modern cars with audible and visual safety warnings, so many road users were not wearing seat belts.

“We do have anecdotal evidence that people get into their cars and lock the seat belt behind them and sit on it – it is amazing when you consider it,” he said.

“We also hear stories of people going to scrap yards and buying the locking mechanism for the seat belt to leave it permanently plugged in. We are really trying to change driver behaviour in that regard.”

Supt Cleary said there was no data to suggest a particular profile of those refusing to wear seat belts, but added it was “widespread across the country”.

A spokesman for the Road Safety Authority said on Friday that while about 94 per cent of road users wear seatbelts, the cohort failing to do so tend to be young people who have been out socialising.

“They are typically young, out socialising at the weekend, getting into the car with alcohol on board, and not wearing the seatbelt,” he said. “That is something that is coming through in the crash statistics.

“People are impaired. It’s as simple as that. They are not making proper, sound decisions. Alcohol impairs drivers, but it impairs passengers as well.”

In terms of those individuals circumventing the in-built alarms for seatbelts, he said an educational programme was needed. “We need these individuals to know that what they’re doing is absolutely idiotic,” he said.

“It’s silly. Seatbelts are proven lifesavers. It defies logic not to wear them. The consequences could be devastating.”

There have been a number of road fatalities in recent months involving individuals who were not wearing seatbelts.

Four people, none of whom were wearing seat belts, were killed after they were thrown from the rear of the Peugeot 306 which struck a wall and a lamp post at West End in Bundoran, Co Donegal, last August.

More recently, members of the Sligo Roads Policing Unit stopped a car when they spotted a toddler standing up behind the driver.

When the car was pulled over, gardaí saw it contained eight occupants – a driver, two adult passengers who were each holding a child and three other toddlers. All five children were under the age of six and not wearing seat belts.

In a back-to-school appeal in August, the RSA urged parents to make sure their children wear seat-belts in cars, as its research has shown one in 10 children in the back seat don’t use proper restraints.