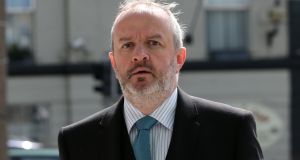 A former investigator into Anglo Irish Bank whose shredding of papers contributed to the collapse the trial of the bank’s former chairman Seán FitzPatrick has agreed to testify before an Oireachtas committee.

Kevin O’Connell, former legal adviser to the Office of the Director of Corporate Enforcement (ODCE), has told the Joint Oireachtas Committee on Business, Enterprise and Innovation that he is happy to appear before it to offer his account of what happened.

He has said in correspondence this week that he is willing to testify after the committee has reviewed a 450-page report due to be submitted by his former boss, Ian Drennan, the Director of Corporate Enforcement. The report will set out the factors that led to the collapse of Mr FitzPatrick’s trial.

Fianna Fáil TD Mary Butler, chairwoman of the committee, confirmed that Mr O’Connell would be invited to give evidence at a later date.

Mr O’Connell, who no longer works at the ODCE, declined to comment.

The committee still had not received Mr Drennan’s report as of Wednesday due to concerns raised by the State’s corporate law watchdog over whether the submission would be covered by Dáil privilege protecting him from legal action from people named in the report.

Mr O’Connell wrote to the committee on February 12th telling them that he should not be solely blamed for the collapse of the trial and that he had “long been looking forward to the full set of facts” relating to “mistakes and errors on my part” and “on the part of others” being heard.

He said he had become “the personification of all that was considered wrong about the State’s dealing with that case”.

Mr Drennan told the committee during an appearance last month – his first since his appointment in 2012 – that the factors contributing to the collapse of the trial “extend well beyond” the failures within the ODCE.

Mr FitzPatrick was accused of furnishing false information to the bank’s auditors Ernst & Young, now EY, over his loans at the bank. He denied any wrongdoing. His first trial collapsed in 2015 after Mr O’Connell admitted shredding papers relevant to the case in “a panic”.

The judge directed an acquittal in a 2017 retrial over the ODCE’s mishandling of the investigation. The judge criticised the coaching of witnesses and contamination of evidence.