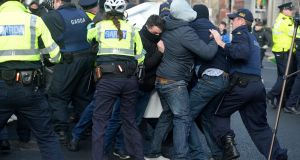 Gardaí had to separate two groups from each other at rallies outside Leinster House on Saturday. Photograph: Dara Mac Dónaill / The Irish Times

A smoke bomb was thrown and gardaí arrested three people as a rally against planned hate speech legislation and counter-protesters clashed outside Leinster House on Saturday.

A group of about 100 people waving Irish flags and carrying placards calling for the protection of “free speech” gathered outside the Dáil at lunch time.

Spokeswoman Tracey O’Mahoney said the event was a gathering of individuals opposed to plans to introduce legislation criminalising hate speech. A number of people said they were supporters of the groups Free Speech Ireland and the Irish Freedom Party.

The Government opened a public consultation on hate crime last October with view to strengthening the provisions of the Prohibition of Incitement to Hatred Act 1989, which Minister for Justice Charlie Flanagan described as “weak”.

Support for hate crime legislation has come from Fianna Fáil among other political parties and the introduction of legislation is included in the Fine Gael general election manifesto.

However, Ms O’Mahoney who is a contributor to a number of online platforms, including the news and comment site Gript, said the proposed hate crime legislation could criminalise the expression of validly held opinions.

She said the proposed law could sanction people based on a perception of hatred.

As the the protesters waved Irish flags outside Leinster House, a counter protest including a large number of youths dressed in black with their faces covered shouted insults.

At one point the counter protesters surged forward and a smoke bomb was thrown but the heavy Garda cordon was not breached. After a number of scuffles, three men were taken away in Garda vans.

Hermann Kelly, president of the Irish Freedom Party, said afterwards the smoke bomb did not come from its side, and he stressed none of the members of the “free speech” protest were involved in violence.

Last December, there was a similar confrontation at the Dáil when members of the Irish Freedom Party and Yellow Vest Ireland were met with a counter protest. Three people were also arrested then.