Pitches ruined by joyriders likely to be unusable until summer

Football pitches in Dublin's Kilbogget Park, home to Cabinteely FC, have been left badly damaged after a car was driven through them and then set alight. Video: Colm Hand 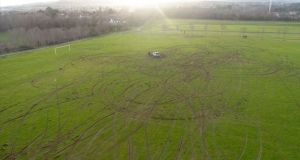 The extent of the damage caused at Kilbogget Park in south Dublin in December. File photograph: Colm Hand

Football pitches in south Co Dublin that were damaged by joyriders in late December are not expected to reopen until the summer.

On December 28th, gardaí in Cabinteely responded to a report of a car driving around Kilbogget Park at about 4.30am. A car was on fire when officers arrived at the scene.

Photographs and video posted to social media after the incident show deep grooves and tyre-track scarring across two pitches, as well as the remains of a burnt-out car.

Dún Laoghaire-Rathdown County Council said repairs to the surface of the pitches were “well under way” and were being carried out in a “joint operation” between the council and the clubs that use the park.

“It is hoped to have the facilities back playable in late summer 2020, although this could be earlier depending on spring weather conditions,” a spokesman for the council said.

“It is difficult to give an estimate of the costs at the moment, but this information will be available once the repairs have been completed.”

Michael Galvin, chairman of Cabinteely FC, a football club that uses the pitches, said there was a lot of work to be done before they can be returned to use.

“There are two pitches affected very badly. One of them is where the car was burnt, and that will be a significant piece of work. They’ll have to dig down under the soil to get rid of all the burnt [remains of the car] and relay it,” Mr Galvin said.

“Then, where it’s been ploughed up, they’ve done some quick, remedial work. They got rid of the tufts of grass, the loose bits, they’ve been removed, then they’ve put some sand in as well. But it’s not ready for use yet.”

Just over 50 teams, with roughly 800 children use the sports ground each week. Mr Galvin added that despite the pitches being out of action for close to six months, the club will ensure that no young child has to miss out on football.

“Matches have started. For the larger kids who play on the 11-a-side pitch, we’ll have to be a little bit creative. Thankfully, we’ve got a great response from the local clubs so if we are stuck, we have some options for us and could maybe use their facilities,” he said.

“That part of it has been quite positive. The whole community is coming together to make sure the kids aren’t missing out.”

He added: “It won’t result in some children being able to not play or anything. We will just be creative about it to make sure that matches get played. We will always make sure that the kids have their football, that’s the whole reason for it.”

Similar incidents of vandalism using motorised vehicles occurred over the Christmas period, including in Drimnagh where off-road bikes were used to damage playing fields on Benmadigan Road. Gardaí are investigating the incident.

Last month, pitches at Whitehall VEC in Dublin, which are used by Home Farm, Whitehall Celtic and Rosmini Gaels, were also damaged by joyriders.