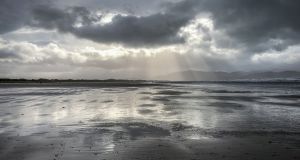 Temperatures everywhere were below long-term average for the month. Photograph: iStock

July was notable for just six days of “dry, pleasant weather”, while the month had above average rainfall everywhere, below average temperatures, below average sunshine and gale force winds.

That is according to the monthly statement from Met Éireann, which notes cool and wet Atlantic weather dominated from the end of June through July.

The six days described as dry and pleasant took place between the 9th and 11th and between the 19th and 21st.

There was rain or showers on most other days during the month, the monthly statement noted.

The month started wet with heavy rainfall taking place on the 1st of the month in the east of the island, on the 3rd in the west and northwest, followed by widespread heavy falls on the 7th and 8th as several pulses of rain pushed in from the Atlantic.

The mostly dry weather between the 19th and 21st was due to high pressure coming up from the Azores, but this broke down as Atlantic weather fronts pushed in over the country again on the 22nd.

Low pressure remained in control of the weather for the rest of the month with some active weather fronts giving heavy rainfall, especially in the southeast on the 27th and in the southwest towards the end of the month causing some flooding.

All rainfall totals were above their long-term average (LTA) for the month, from 116 per cent at Roche’s Point, Co Cork to 216 per cent at Valentia Observatory, Co Kerry. Valentia observed its wettest July since 2009.

The month’s wettest day was also recorded at Valentia Observatory, Co Kerry with 54.5mm on Wednesday the 29th, its wettest July day since 1940.

Temperatures everywhere were below long-term average for the month. At Ballyhaise, Co Cavan, where the average July air temperature is 13.7 degrees, the average this July was down by 1.8 degrees. This was the biggest drop in air temperatures, while the smallest drop was 0.3 degrees at Cork airport and Phoenix Park, Co Dublin.

The month’s highest temperature was reported at Phoenix Park on Thursday the 16th with a temperature of 24.1 degrees, considered good for an Irish summer. The month’s lowest air minimum was recorded on Monday the 20th at Mount Dillon, Co Roscommon with 2.2 degrees, its lowest July minimum on record.

Dublin Airport had its dullest July for 34 years with a total of 104.2 hours sunshine.

Monthly average wind speeds ranged from 5.5 knots (10.2km/h) at Ballyhaise, Co Cavan to 13.6 knots (25.2km/h) at Mace Head, Co Galway. Gales were reported on the 5th. The number of days with gale force winds ranged from zero days at Phoenix Park, Co Dublin to one day at both Mace Head, Co Galway and Malin Head, Co Donegal. There were no strong gales or storms reported this month.