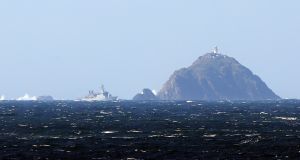 A Navy vessel off Blacksod Lighthouse, where the search for Rescue 116 is being concentrated. Photograph: Colin Keegan/Collins Dublin.

Efforts are continuing in a short weather window to find the three missing crew from Rescue 116, the Dublin-based Irish Coast Guard Sikorsky S-92 air-sea rescue helicopter which crashed off the Mayo coast early on Tuesday.

She was recovered in a critical condition from the waters off Blacksod Bay by the RNLI Achill lifeboat and Irish Coast Guard helicopter on Tuesday morning and pronounced dead in Mayo General Hospital, Castlebar.

The focus is on pinpointing the position of the aircraft’s black box, after a faint transponder signal was detected on Wednesday.

The “faint chirp” was picked up by hydrophone deployed on a local half decker fishing vessel in some 40 metres of water surrounding jagged rocks encircling Blackrock lighthouse, 13km west of Blacksod.

The location of the signal is particularly hazardous, just 50 to 60 metres from the main rock. A five to six metre Atlantic swell around the rock made an approach too difficult on Thursday morning.

A 12-metre fishing vessel An Gearoidín was loaded with side-scan sonar and hydrophone equipment on Thursday. It tried to approach the area, escorted by Naval Service and Garda diver ribs, but was advised to pull back for safety reasons in 24 knot north-west winds.

Another attempt will be made later when weather conditions are expected to ease slightly. Conditions off the Mullet peninsula can change hourly, and considerable seamanship is required at the best of times in the treacherous waters around the islands and outcrops dotting the coastline.

Further equipment, including additional high frequency sidescan sonar which can create images of the sea floor, is en route from the Marine Institute in Galway, while British air accident investigators are assisting the Air Accident Investigation Unit (AAIU).

The AAIU, which has already inspected Blackrock lighthouse, has planned a further visit what has been described as an “area of interest” on the rock in an effort to locate the flight recorder.

On-scene co-ordination is being provided by the Naval Service ship LE Eithne under the command of Cdr Brian Fitzgerald. The LE Roisín, which spent the last two days retrieving wreckage from smaller vessels, remains at the scene.

The Marine Institute’s Celtic Voyager, with experienced surveyors and equipment, remains on scene, and the Irish Lights tender Granuaile, equipped with heavy lifting equipment, is positioned to assist.

Weather is forecast to freshen over the weekend, but the Irish Coast Guard says air, sea and shore searches are continuing, with low tide searches focused on Achill and the Inishkea islands, north and south of the Mullet peninsula.

Among the shore search team, co-ordinated by the Irish Coast Guard’s Ballyglass unit, is Irish Coast Guard Doolin volunteer Bernard Lucas, whose wife Caitriona Lucas died during a search for a missing man off the Clare coast last September.

Ms Lucas, a long-time and highly experienced member of the Irish Coast Guard Doolin unit, knew the late Capt Dara Fitzpatrick, the Rescue 116 pilot who died on Tuesday. Both would have trained together on joint exercises, Mr Lucas said.

“I came up on my own yesterday to Blacksod, and didn’t want to make a big deal about it. This is not about me, but about the families,”Mr Lucas said.