Rescue 116 crash: ‘It is a living nightmare for all of us’

Orla Smith, sister of missing Coast Guard Rescue 116 winchman Ciarán Smith has appealed to fishermen along the north west coast to assist in the search for her brother and his colleague Paul Ormsby . Video: Keith Heneghan 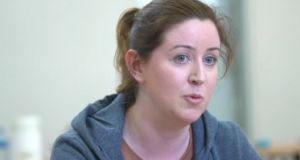 Orla Smith appeals for help from the fishing industry in the search for her brother Ciaran.

The family of one of the four Coast Guard Rescue 116 helicopter crew members has appealed to the fishing industry to participate in an extended search for the crew’s two-man winch team.

Winch operators Ciaran Smith (38) and Paul Ormsby (53) are still missing after the aircraft crashed off Blackrock Island, 13km west of north Co Mayo, in the early hours of March 14th.

The pilots of the Sikorsky S-92 helicopter, Capt Dara Fitzpatrick (45) and co-pilot Capt Mark Duffy (51), have been confirmed dead.

“We need those boys home now. We really do,” Orla Smith, sister of Ciaran Smith, said in north Co Mayo on Monday.

“My parents need them home, my sister-in-law needs him home. My nieces need him home. They have to come home now.

“To all fishing vessels, big and small, from Achill Island to Arranmore, we are appealing to them to please come to help us now.

“We need them, we need their knowledge and we need them in the ongoing efforts to find Ciaran and Paul.”

The RNLI has offered to co-ordinate a marine search for the two men from counties Mayo to Donegal.

Its offer has been endorsed by the Erris Inshore Fishermen’s Association and the Lost at Sea Tragedies (LAST) organisation.

On Sunday evening, the Irish Coast Guard and An Garda Síochána pledged to continue their inter-agency search for the men, after it was confirmed that there was no trace of them under or near a key section of the wreckage from the helicopter lifted from the crash location off the southeast of Blackrock Island.

She noted in particular the suffering experienced by her parents Michael and Teresa, her sister-in-law and nieces, and her extended family, as well as the Ormsby family, as the winch team remain missing.

Ciaran was due to mark his 39th birthday this Sunday with his wife Martina and his children, aged 12, 10 and seven. He was a keen cyclist who had raised considerable funds for charity.

His colleague, Paul Ormsby, was a highly-respected winch operator in both the Air Corps and Irish Coast Guard. Paul had participated in many hazardous rescues and medical evacuations during his career.

Ms Smith paid tribute to all those who had “put their lives on hold” to participate in the search and recovery effort over the past three weeks.

“We didn’t get the result we were hoping for here yesterday,” Ms Smith said.

“We were . . . hopeful that the two guys would be with the wreckage, but they were not.

“So we need to broaden the scope. We need to keep moving forward, keep focused and devise a new plan.

“The guys who have been involved in the rescue operation so far, and are still involved, have been amazing. They’ve worked nonstop. You can see it in their faces; they’re exhausted.

“They’ve continued to push to try and find Ciaran and Paul. They’ve had a win already, they found Mark Duffy and brought Dara Fitzpatrick home to her family as well,” she said.

“It is a living nightmare for all of us.

“We’re doing our best to keep going, to stay as strong as possible and to stay as positive as we can. But it is tough, it is really, really tough.”

Ms Smith emphasised that safety was a prime consideration in any further search efforts.

“It is absolutely essential that everyone remains safe and we want [the search] done in a co-ordinated and safe fashion.

“We don’t want anyone else becoming harmed in this. We’ve had enough now.”

The Irish Coast Guard has said further operations will be carried out with the Marine Institute’s remotely-operated vehicle (ROV) later this week.

Community support for search and rescue volunteers is still being provided in Eachléim.

She said she was glad to be able to support the crew members’ families.

He died when the ship sank after hitting rocks in the mouth of Glandore Harbour in west Cork in January 2012.

“Sometimes local knowledge can be beneficial, and this [RNLI-backed search] is worth trying,” Ms Uí Aodha said.

She also paid tribute to the enormous search and recovery effort following the Rescue 116 crash.

Eamon Dixon, of the Erris Inshore Fishermen’s Association, said the organisation would support the family’s appeal.

He said the organisation would enlist support up the coast and work with the RNLI and the Garda.

The key section of wreckage was lifted on Sunday by west Cork salvage tug Ocean Challenger and Naval Service divers from a depth of 40m.

The section was loaded onto the Irish Lights ship Granuaile for transport to Galway and transferred from there to Gormanston, Co Meath, where it will be examined by the investigation team.

An initial analysis of the helicopter’s flight data recorder by the Air Accident Investigation Unit (AAIU) has ruled out mechanical anomalies before the crash.

The helicopter was approaching Blacksod lighthouse for a routine refuellingas it provided support for a medical evacuation when it lost communication close to Blackrock Island.

The AAIU has confirmed the helicopter’s tail section struck rock on the island’s western end.

AAIU chief inspector Jurgen Whyte has said the investigation into the incident will take “several months” and will focus on operational elements, including navigational aids, procedures and human impact.

A preliminary report on the crash must be published within a month.