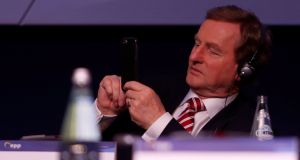 The weeks after the European Council summit on Saturday April 29th are seen as the most likely time for Enda Kenny to stand down. Photograph: Darrin Zammit Lupi/Reuters

It is the usual curse of prime ministers who take over a government between elections to be criticised as unelected figures with no personal mandate of their own.

Such slanging will not be strictly true in the Irish sense. The Taoiseach has to be elected by the Dáil; Theresa May, for example, was asked to form a government by Queen Elizabeth.

Yet how the next taoiseach assumes office will matter, especially in an era when deference to politicians is dead. The celebrity age demands that the electorate believes it knows something, a superficial acquaintance at least, with those who want to lead.

While the revelry of songs on the back of lorries was undoubtedly a heartfelt communion of local pride, it jarred with urban voters

Fine Gael may not be a party of showtime, but it recognises the need for spectacle and public participation in this process. How it is to be done has already been sketched out.

The coronation of Brian Cowen as Fianna Fáil leader was an example in how not to become taoiseach. The lack of a contest bred complacency and the public’s introduction to Cowen as leader came by way of a victory lap in his native Offaly. While the revelry of songs on the back of lorries was undoubtedly a heartfelt communion of local pride, it jarred with urban voters.

The weeks after the European Council summit on Saturday April 29th are seen as the most likely time for Enda Kenny to stand down.

Kenny could resign, for argument’s sake, on Tuesday May 2nd, although such a timeframe may be too soon. If he stands aside then, the period for gathering the required eight nomination signatures from TDs, senators or MEPs to enter the contest will last for three days, closing on the Friday of that week.

Nothing, on a party level, will take place for one week. There will be four regional hustings, pencilled in to run across the weekend of the following week. There will be one each in Dublin, Cork, the midlands and the west, taking place on the Friday, Saturday, Sunday and Monday.

This will again be followed by an official lull. Regional voting – the number of polling stations will be in the mid-20s – will then take place over the next weekend, again on the Friday, Saturday, Sunday and Monday.

As of now, there will not be a special televised debate in a broadcast studio between the contenders. The party does not want to invite the wrath of other media organisations by granting exclusivity to one. But cameras and microphones will be welcome into each party hustings.

All internal party planning is working towards an election during Dáil term time. The main action will take place in the weekend period when the Dáil is not sitting, in an attempt to blunt claims that Fine Gael is putting its internal affairs before the work of government.

The ballot of the parliamentary party, which comprises 65 per cent of the electoral college that chooses the Fine Gael leader, will take place in Leinster House on the Tuesday morning after regional voting has concluded.

If that meeting is the closest the contest will come to traditional leadership elections in either Fine Gael or, indeed Fianna Fáil, what will follow will be entirely new ground for either of the big two political parties.

The ballot boxes from the regional voting stations will be taken to a special count centre elsewhere in the city, along with the votes cast by TDs, senators and MEPs.

The count will be entirely open, with members of the media allowed to conduct tallies as the boxes are opened and votes counted.

It is then anticipated that the winner will be announced just in time for the main evening news bulletins, with a press conference hopefully broadcast live to the nation.

It is the closest Ireland will get to a US-style primary election. Other parties, such as Labour, have used similar methods to elect their leaders but this will be about the office of Taoiseach.

All parties are already preparing for the next election

Of course, public buy-in can only go so far when the electorate is comprised of the Fine Gael parliamentary party, councillors and 20,000 paid-up and eligible party members.

The campaign will nevertheless serve as a three-week long handshake between the public and the next leader of Fine Gael, an introductory coffee before the courting of the next general election.

All parties are already preparing for the next election. For Fine Gael, that process will accelerate rapidly under a new leader, just in case he or she seeks the extra seal of a personal mandate sooner than anyone expects.