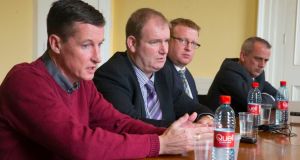 Some of his Bill Kenneally’s victims, including Jason Clancy, second from left. Photograph: Patrick Browne

An inquiry into the abuse carried out by Bill Kenneally must be set up quickly following the death last month of a key figure, the solicitor for four victims has warned.

The four men are seeking a full inquiry into the Garda Síochána’s investigations into the convicted Waterford paedophile, who was jailed for 14 years last year, but they believe delays could be seriously compromised.

Darragh Mackin of KRW Law complained that he has not yet received a reply to a call for an inquiry into the Garda’s conduct after learning in 1987 that Kenneally, a former national basketballcoach, was abusing a young boy.

The call has become more urgent, he said, following the death in February of Monsignor John Shine, whom Kenneally’s victims believe knew about the abuse from at least 2002.

“That’s an example of best evidence being lost and immediate action needs to be taken and we’ve written again to re-iterate that point,” the Belfast-based solicitor declared, “We need to get this inquiry established as quickly as possible.”

Abuse survivor Jason Clancy learned last year that gardaí first knew of the allegations in 1987 when he met gardaí at a meeting organised through Kenneally’s uncle, the late Fianna Fáil TD Billy Kenneally.

On December 30th, 1987, Kenneally made a verbal admission to Supt Sean Cashman and Inspector PJ Hayes about his behaviour but no written statement was taken from him as the boy’s family had opted not to make a formal complaint and gardaí advised Kenneally to get counselling.

Mr Clancy presented a dossier on the case to Minister for Justice Frances Fitzgerald before she met him and four other victims last November, where they pressed her to set up a Commission of Inquiry into what gardaí and the local health board knew and did about Kenneally 20 years ago.

Ms Fitzgerald said she had forwarded it to Garda Commissioner Noirín O’Sullivan who sent it to Waterford gardaí seeking more information.

Since then, it has emerged that local gardaí have begun an investigation.

However, Mr Mackin has now requested that this local investigation be discontinued, arguing that some of Kenneally’s victims do not believe that it can be truly independent.

The Department of Justice declined to comment on the calls, but said that it was aware of their concerns and would be in further contact with the men and their legal representatives.