It has only a few hundred members now, but the Orange Order is still active in the South

It has only a few hundred members now, but the Orange Order is still active in the South. The Dublin & Wicklow Loyal Orange Lodge is planning a “small, symbolic” Orange march to a nearby church within the next year. Video: Kathleen Harris 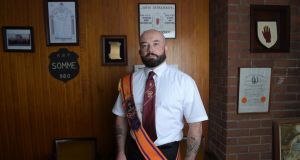 The Orange Order was once embraced in some southern counties, as is amply illustrated by a folk tale about two men from the Co Cavan village of Killeshandra.

On the same day in the late 1700s each set out from the rural parish – later immortalised, ironically, in the rebel ballad Come Out, Ye Black and Tans – to seek a warrant to set up an Orange lodge there. When they encountered each other at the order’s spiritual home, in Loughgall, Co Armagh, the men were forced to draw lots for the privilege of establishing Killeshandra’s first Loyal Orange Lodge.

The men were not alone in their enthusiasm: the Orange Order once had up to 10,000 active members in what is now the Irish Republic. They were enrolled in 250 lodges active around the turn of the 20th century, according to the historian Quincey Dougan.

Many of the Orange halls in which the lodges met remain standing throughout the country, albeit in varying states of disrepair. The buildings represent a lost link to a society since fractured by partition, and the resultant exodus of Protestants from the Irish Free State northwards.

The historical significance and cultural symbolism of these halls are largely lost on local communities now – not that those communities can be blamed, given the paucity of information available from official sources.

A county-by-county search of the National Inventory of Architectural Heritage website reveals only 10 protected buildings that have “Orange hall” recorded as their primary historical use.

This deficit of information may reflect an ambivalence on the part of successive Irish governments, according to Dougan. “There’s just a total lack of understanding. The absence of the knowledge is the major factor. Why is there that absence? It’s been pushed down into the ether. It’s been pushed off to one side, because it doesn’t fit a modern-Ireland narrative,” he says.

Dougan’s blog contains details of long-since disbanded lodges in surprising locations such as Achill Island, Tralee and Bandon, in Cork – an area where, he says, the Twelfth of July commemorations of King William of Orange’s victory at the Boyne predate those in the North.

The ravages of time have left little evidence to corroborate claims of Orange Order activity in certain areas, but some intact structures unashamedly display their former associations with the order, such as Leap Castle, in Offaly, once home of the renowned Darby family, and the organisation’s former headquarters on Parnell Square in Dublin – formerly Rutland Square – where a cache of UVF guns was found in the basement after the building came under the control of the anti-treaty IRA in 1922. (It is now a Youthreach transition centre.)

At the Museum of Orange Heritage in Sloan’s House in Loughgall, the site of the first Orange Order meeting, in 1795, Dougan has amassed so many transfer papers for members in the south, dating from the early 1900s back to the early 1800s, that they are kept in shopping bags rather than behind glass.

Dougan says there are active Orangemen in 11 counties in the Republic; membership is in the hundreds, and only a handful of lodges are left.

Robert Mitchell from Co Leitrim has been an integral part of the county’s modest lodge scene for three decades. Now living in Tyrone, Mr Mitchell is still a member of the Killegar lodge, but he is unconvinced about the Republic’s commitment to recognising his culture.

“There’s nothing done; nothing done. Absolutely nothing. There could be stuff done – that goes without saying – but I don’t think there’s any particularly big will to do it,” he says.

The grand master of Cavan Orange lodge, Henry Latimer, disagrees. He says things have improved in recent years, particularly since the presidency of Mary McAleese.

But all members are adamant that violence and intimidation are never far away, with reports of Orange halls being vandalised or set alight in Cavan and Monaghan in recent years. Dublin & Wicklow Loyal Orange Lodge – LOL 1313 – on Northumberland Road in the capital, bears testimony to this: the letters “IRA” are indelibly etched into a purposely cryptic black sign on its facade that reads “Protestant Hall”.

A number of barely active local lodges consolidated in the 1980s; the one surviving lodge sold the ornate red-brick building next door in 1983, to downsize. LOL 1313 now has about two dozen active members. Most of them attend its monthly meetings, which involve prayer and discussions.

The organisation is undeniably sectarian, given its bar on non-Protestants, admits Dublin’s grand master, Chris McGimpsey, who commutes to chair meetings from Belfast, where he is an Ulster Unionist Party councillor.

“The image of Orangemen spending their lives sitting in a lodge room planning the downfall of the church of Rome is not realistic at all,” he says.

You would be forgiven for mistaking Chris Thackaberry’s background had you not encountered the 44-year-old Dubliner wearing his orange sash and union-flag pin.

A past master and current chaplain of the lodge, he says he could not ask for more protection from the State for his freedom of expression. “It’s fantastic. See the Irish Constitution, article 40.6.2: free assembly under the law without bearing arms. We can assemble 40 brethren out on that road with collarets on, with no parades commission, so we cannot complain about the Irish State or its Constitution. It protects our rights. In the South, pluralism and openness is the best friend of Orangeism in my book.”

A “liberal, Anglican” member of the order, Thackaberry travels to Belfast for the Twelfth of July celebrations each year but is uncomfortable with the burning of the Irish Tricolour on bonfires across Northern Ireland the night before. “I don’t think any flag of any nation should be burned on any fire. I don’t agree with it. It’s a demonstration of hate,” he says.

Winston Smith, a former Trinity College Dublin librarian who is now in his 70s, and who joined the order in 1965, takes largely the same view of flag burnings. “It’s a childish thing,” he says. “Educated adults wouldn’t be involved in that.”

The Dublin & Wicklow lodge is planning a “small, symbolic” Orange march to a nearby church within the next year, something that has become a moderately more frequent spectacle in these more tolerant times.

Although he is not particularly keen on taking over O’Connell Street any time soon, Smith says a procession on Dawson Street, past a plaque commemorating the first grand-lodge meeting, in 1798, would show monumental progress. “We want to try and have a parade sometime as a stepping stone,” he says. The order “will feel accepted if Orangemen will be allowed to hold a parade in Ireland in their own capital city”.