Why did the elephants cross the road? 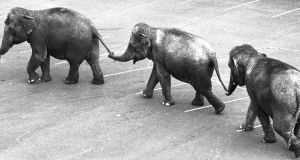 When I was a kid we used to sing a song which went: “Nellie the elephant packed her trunk and said goodbye to the circus. Off she went with a trumpety-trump: Trump! Trump! Trump!”

Sung by the child actress Mandy Miller, this was a hit single produced by, of all people, George Martin – who would, later in life, switch from recording elephants to recording Beatles.

We didn’t know that in the late 1950s, of course. Nor did we know much about elephants. We didn’t know how they grieve for their dead, or how brutally they’re treated by poachers. We didn’t know what was coming down the tracks: habitat loss and climate change. We thought it was fine to have elephants in the circus.

This image, which was published on the front page of The Irish Times on the last day of 1992, was accompanied by a caption which read: “Trunk and orderly: Mr Richard Chipperfield exercising the elephants on arrival at the Point Theatre, where the Chipperfield Circus opens on Saturday . . .”

At first glance, it’s kind of cute. The young man out for a walk with his pets on a lead. The massive creatures lumbering obediently behind, trunks curled around tails like toddlers holding hands on an outing.

But it’s also bleak and sad. Elephants don’t belong on tarmac: against the treeless, pitiless background the animals look shabby and ill-groomed.

As for the young man in the photo, six years after it was taken Richard Chipperfield – then in his mid-20s – was working with Bengal tigers in Florida when one of the animals clamped its jaws around his head. He survived, but suffered horrific brain injuries.

Between outright and partial bans in the EU, worldwide and closer to home, animal circuses appear to be headed for extinction. It’s an emotive subject; if you wish to read something balanced and sensible on the matter, try the “Big Stop” section of the ISPCA’s website. And if you’re going to the circus this summer, here’s hoping it stars talented human performers, acting as wild as they want to.

These and other Irish Times images can be purchased from:

irishtimes.com/photosales. A book, “The Times We Lived In”, with more than 100 photographs and commentary by Arminta Wallace, published by Irish Times Books, is in bookshops now priced €19.99.