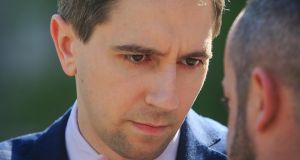 Minister for Health Simon Harris is expected to come under pressure to provide full details about the appointing of doctors who do not have essential specialist training. Photograph: Gareth Chaney Collins

It has been recognised officially for a number of years that public hospitals are facing serious difficulties in recruiting and retaining hospital consultants in many areas.

Doctors claim that up to 300 posts are vacant and positions which in previous years would have been enviously sought now receive few ,if any, applications.

Representative bodies argue the failure of the Government to implement a contract agreed in 2008 – which proposed significant pay rises in return for work practice changes and private practice restrictions as well as further cuts to new entrant pay imposed in 2013 – has left Ireland uncompetitive in terms of remuneration compared to other parts of the English-speaking world.

The Irish Hospital Consultants’ Association at the weekend argued that 15 per cent of permanent consultant posts in the country’s acute hospital service were unfilled on a permanent basis. It said management in hospitals were resorting to appointing doctors not on the Medical Council’s specialist register and who do not have the essential specialist training, skills and expertise to fill temporary consultant positions.

The HSE acknowledged that in emergency situations this is taking place. However the extent or scale of this practice is not publicly known, although Minister for Health Simon Harris is expected to come under pressure in the coming days to provide full details.

A report drawn up by public service management for the Public Service Pay Commission does give some insight for the first time on its views of the implications of the recruitment and retention difficulties. The report says locations such as Waterford, Letterkenny, Naas and Portiuncula Hospital in Ballinasloe struggle to recruit consultants in any specialty.

It maintains that specialties such as psychiatry, surgery, emergency medicine and paediatrics are experiencing challenges in securing senior doctors to take up posts irrespective of the location of the recruiting hospital.

There is no suggestion that the practice of appointing doctors who are not on the specialist register to temporary consultant positions is being carried out in these hospitals or specialties.

The report says there are about 3,000 permanent consultant posts in public hospitals across the country and about 200 are vacant.

It also says there are about 300 non-permanent consultant posts and most of these appear to be associated with vacant permanent posts. “This means that service is maintained – to a certain degree – in the absence of a permanent appointee.”

The report says there were a large number of posts which had been approved by the Consultant Applications Advisory Committee (CAAC) to be filled. It says the National Recruitment Service is awaiting a job description from the relevant acute hospital or mental health service before it could be progressed to the Public Appointment Service to begin to try to make the appointment. “The effect of this is to maintain a vacancy with no permanent recruitment process initiated.”

The committee also found that hospitals and mental health services often waited until a serving consultant had retired before initiating the application to secure a replacement. “This has the effect of creating vacancies even where the impending potential vacancy was known years in advance.”

The report given to the Public Service Pay Commission by public service management says the process for recruiting consultants has to deal with filling both additional positions that are established each year but also finding replacements for positions that become vacant.