Removal of paving stones from Cork city streets being investigated

City Council is expected to report ‘bizzare’ incident to gardaí 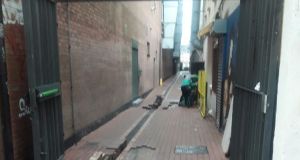 Cork City Council has begun an investigation into an incident where someone removed paving stones from pavements in the city centre and left flowers and greenery scattered over the damaged area.

Cork City Council sweepers made the discovery early on Sunday morning and found paving stones had been removed at two locations on Paul Street and two locations at nearby St Peter and Paul’s Place.

The four locations are less than 200 yards from Cork’s main thoroughfare of Patrick Street and are normally busy shopping areas but are much quieter now due to the Covid 19 lockdown.

Dozens of paving stones were removed at each of the four locations and neatly stacked nearby with whoever removed the stones scattering cut flowers and greenery in their place to cover the spaces.

According to a City Council spokesman, it would be relatively easy for whoever removed the paving stones to do so if they had appropriate tools such as a shovel or pick to lever out the first stone.

Once the first stone is removed, the others could be removed by hand as they are not cemented together but simply packed tightly together on top of a concrete foundation beneath the path.

The City Council spokesman said they are examining to see whether any of the areas are covered by CCTV cameras.

“It’s most bizarre -we’re not sure is this some sort of environmental protest but if it was, you might expect those responsible to perhaps plant flowers rather than just leaving cut flowers lying there.”

Cork City Council is expected to report the matter to gardaí.

Green Party Cllr Dan Boyle condemned the removal of the paving, describing it as “weird”, and said if it was some sort of protest in favour of green spaces, it was deeply misguided in its effects.

“If it was some loose type of activism and the point that was being made was to plant flowers instead of concrete, then I think it’s had utterly the opposite effect to what it was trying to achieve.

“We need better wider footpaths and road space for pedestrians and cyclists to use - not less as is the result of this sort of activity which makes footpaths less accessible and less safe,” he said.

Cllr Boyle said he knew the streets are a lot quieter now due to Covid-19 restrictions but it would have needed either a lot of people or one person with a lot of time to move so many paving stones.

“I would have sympathy that the actual green space we have should be better planted and more wilded areas in terms of biodiversity but you don’t have to rip a footpath to make that point.”