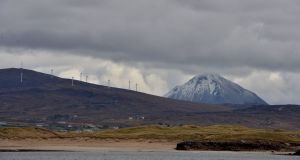 A snow-covered Mount Errigal as seen from Gola Island, off the west coast of Co Donegal. National Geographic Traveller declared Donegal one of the coolest places “on the planet”. Photograph: Alan Betson

By any measure 2016 was a troubled year both domestically and internationally with industrial unrest, political upheaval and conflict never far from the top of the news agenda

Despite the choppy waters it was still plain sailing for the Irish tourism sector and not only has 2016 been a record-breaking year, with well in excess of 10 million visitors coming to Ireland and spending €5.4 billion while they were here, 2017 looks like being ever better, according to Tourism Ireland.

This year 10.5 million people visited, up almost 1.5 million on 2015. “We know that the result of the UK referendum on EU membership may bring challenges for tourism in 2017. Therefore, it will be more important than ever that Ireland stands out as a top tourist destination in our key overseas markets,” the Minister for Tourism, Shane Ross, told a tourism conference as the curtain came down on the year.

Tourism Ireland is acutely aware of the potential impact Brexit will have and has significantly increased its marketing budget geared towards audiences in North America and mainland Europe for next year.

Sometimes, the marketing is done for it, as it was in November when a magazine in the National Geographic stable declared Donegal, one of the less-travelled counties in the Republic, the coolest place “on the planet”.

National Geographic Traveller’s annual roll call of places to visit is based on the opinions of a panel of the magazine’s contributors who “considered many destinations for our Cool List 2017”, said its editor Pat Riddell. “But we felt Donegal was in a real sweet spot – off-radar and hard to access, but on the cusp of a breakthrough. On the one hand, you have big pushes like the Wild Atlantic Way and the recent visit of Star Wars; on the other you only have to drive a few miles to have a beach or a road completely to yourself . . . there’s an array of reasons to visit, from surfing beaches in Magheroarty and Ballyhiernan Bay to Horn Head – a driving, walking of cycling loop that squeezes the 1,600-mile Wild Atlantic Way into a 4.5-mile nutshell,” says the magazine.

Alex Connolly, head of communications, Fáilte Ireland, has said “publicity like this, particularly in a prestigious magazine like National Geographic Traveller will give a boost to tourism.”

But travel writer and the author of several editions of the Lonely Planet guide to Ireland, Fionn Davenport, is not so sure magazine accolades and blockbuster cameos bring people here.

“Star Wars has been huge in terms of chat, but given that the numbers to the Skelligs are strictly controlled and dependant on weather, I don’t think it’ll make a huge difference to tourism numbers overall,” he says.

He points to “Ireland’s traditional strengths – scenery, people and the ‘experience’ of coming here” as being the real and enduring draw. “It sounds a bit hokey to us, but to a visitor the idea of a wander around some monastic ruins or a walk along some scenic cliffs followed by a night of live music by a bog fire is intensely appealing,” he says.

“There is a gap between how we see ourselves – as a modern land of motorways and macchiatos – and how others see us – a traditional country with stunning landscapes and warm, welcoming people who speak English and are fond of enjoying themselves.”

And then there is the Wild Atlantic Way, undoubtedly one of the big tourism successes of recent decades but it is, perhaps, not yet as successful as we think. In the US, awareness of what it is runs at about 6 per cent. “The truth is that it is still in its infancy – it’s only been around for three years – so it’ll be a long while yet before it becomes – like the Pacific Coast Highway in California or the Garden Route in South Africa – a primary driver of tourism to Ireland,” argues Davenport.

A large cloud on the horizon is Brexit. And a fear for UK travellers in the months and years ahead is likely to be cost of holidaying in the euro zone. These fears will inevitably be “exploited by other ‘Wild Celt’ destinations like Scotland”, warns Davenport.

Joe Dolan, president of the Irish Hotels Federation, described tourism as “one of the shining lights of the Irish economy” but he warned that growth rates from Britain were unlikely to be sustained.

“There are good reasons to be optimistic about our key North America and European markets in the coming year,” he says. However, there are signs that growth is slowing out of the UK market. While it is too early to say what the effect of Brexit will be, the uncertainty and the fall in the value of Sterling will pose challenges.”

Hotels – no room at the inn?

At 82 per cent, hotel occupancy in Dublin reached record levels this year and on Saturdays occupancy rates climbed to 90 per cent with demand in the capital set to remain high into 2017 due to a hotel bed shortage.

Earlier this year, a Holiday Inn Express opened on O’Connell Street, adding 198-beds into the mix, but a 182-room Clyde Court in Dublin 4 closed, so the city ended the year only 16 extra rooms better off.

With tourism numbers booming and demand far outstripping supply, billionaires such as John Malone and banks, including Goldman Sachs, have sunk money into Irish hotels.

More could easily be sunk. In fact the capital needs close to 5,000 new hotel bedrooms to satisfy demand in and without them, the city is going through a “capacity crunch”, according to the Irish Tourist Industry Confederation (ITIC).

One problem is planning. It is notoriously difficult and time consuming to get a hotel project over the line. Earlier this year, John O’Sullivan, the owner of the Hodson Bay Hotel Group, which has three properties west of the Shannon, applied for permission to develop a 263-bedroom hotel on a derelict site near St Patrick’s Cathedral.

The project was approved by Dublin City Council after which An Taisce appealed it to An Bórd Pleanála whose planning inspector recommended approval as long as one floor was removed from the original plan. But an Bórd Pleanála still said no so the hotel can not be built as planned.

Another problem is a lack of development capital. While billionaires are happy to snap up high profile properties, Irish banks are reluctant to finance hotel building from scratch. According to property consultancy company, CBRE, there are 49 “shovel-ready” hotel schemes with full planning permission waiting to be built in Dublin with the missing piece of the puzzle being money.

The lack of hotel capacity does not just impact on tourists. A shortage will make it harder to to attract overseas conferences, while foreign direct investment could be stymied if executives can’t find any room at the inn when they first come to town.