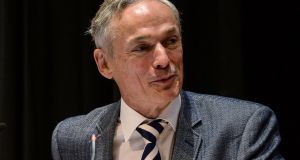 Minister for Education Richard Bruton said the agreement showed what was possible through dialogue and negotiation within the Lansdowne Road agreement. Photograph: Sportsfile

A controversial two-tier pay scale for teachers recruited after February 2012 is to be ended on foot of a deal reached between the Government and the INTO and TUI trade unions.

The Department of Education said the deal would result in increases of up to €2,000 per year for new teachers at the start of their careers.

It said that over a teacher’s career the agreement could be worth about €135,000.

However, the deal will not apply to members of another teaching union, the ASTI, which has remained outside of the Lansdowne Road public service pay agreement.

The Department of Education said that new revised salary arrangements for teachers recruited since 2012 would be implemented in two phases, on January 1st, 2017 and January 1st, 2018.

“The effect of this will be to assimilate all post January 1st, 2011 and post February 1st, 2012 new entrants to teaching onto a single new salary scale which will incorporate the honours primary degree allowance.

“This new arrangement will apply to members of the teachers’ unions which have signed up to the Lansdowne Road Agreement (INTO and TUI).”

Members of the TUI and INTO will also receive an increase of nearly €800 from the weeks ahead in respect of supervision and substitution duties in schools.

This money is not being paid to members of the ASTI.

Minister for Education and Skills Richard Bruton said: “Today’s announcement is great news for new teachers. This agreement shows what is possible through dialogue and negotiation within the Lansdowne Road agreement”.

Minister for Public Expenditure and Reform Paschal Donohoe said: “Much work has been undertaken in recent months in respect of this issue. Through negotiation and full engagement a result has now been reached that is agreeable to all.

Qualification allowances were withdrawn for new teachers with effect from February 1st, 2012. The most significant of these was the honours primary degree allowance which had a value of €4,918 per year.

“This was withdrawn, and some improvements were made to the pay scale to alleviate the effects of this withdrawal on teachers in the early years of their careers. The effect of these changes was to reduce pay by amounts that varied depending on where teachers are on their pay scale. For teachers in the early years of their pay scale, this meant reductions in their pay of up to €2,000. Today’s agreement reverses those measures, thereby restoring the value of those reductions to the teacher pay scale”, the Department of Education said.