Income from foreign students important to finances of college 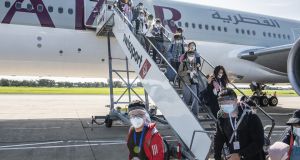 Queen’s University Belfast for the second time in two weeks has chartered a Qatar Airways plane to bring hundreds of Chinese students to Belfast.

On Saturday about 400 new and returning Queen’s University students were flown into Northern Ireland from Beijing by Boeing 777 to begin the college term. Two weeks previously the university chartered a flight to bring in about 370 Chinese students.

The college emphasised all students were required to show a negative Covid-19 certificate, taken no more than five days before flight departure, in order to board the flight. The students are now quarantining for two weeks.

A college spokesman explained that each student paid no more than the commercial cost of the flight of just over £600 (€662) while Queen’s subsidised the remainder of the cost of chartering the planes.

For “commercially sensitive” reasons Queen’s did not say how much the two flights cost the college but, based on the estimated £16,000 hourly cost of hiring such aircraft, and allowing for the £600 student payments, it could have been in the region of £500,000. Queen’s said it “got a very good deal” in hiring the aircraft from Qatar Airways.

Income from foreign students is important to the finances of Queen’s University.

Chinese students at Queen’s account for about 47 per cent of its foreign population, ahead of southeast Asia (Malaysia, Thailand, Indonesia) at 18 per cent, the Americas at 12 per cent, south Asia (India, Pakistan, Bangladesh) at 11 per cent and the Middle East/Africa (10 per cent).

Chinese students were Queen’s biggest international intake, a college spokesman said, although he added the college had a “much smaller proportion” of Chinese students compared with British universities. Overall, Queen’s has about 23,000 students with about 1,000 of them from China.

Chinese and other foreign students pay much higher fees than local students, particularly for subjects such as medicine and dentistry.

The spokesman, however, pointed out that foreign students paid much less for a wide range of other subjects. For instance, a foreign student studying regular arts or humanities subjects would pay about £14,000 per annum compared with £4,395 for local students.

Subjects such as pharmacy and engineering would be higher for foreign students at about £19,000 each year.

The spokesman said the Chinese generally settled well in Belfast. “What Chinese and international students tend to like about Queen’s and about Belfast is that it is a small, safe city which allows them concentrate on their studies as opposed to going to a big metropolis like London, and also the fact that it is a campus university within a city,” he said.

“They also love the history and the heritage of Queen’s and Belfast and they generally do very well. They are very good students when they are here,” he added.