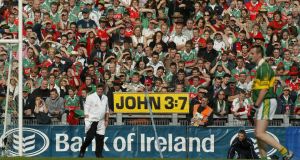 Frank Hogan at the All Ireland Football Final in 2004 Kerry vs Mayo. Photograph: INPHO/Billy Stickland

One of Ireland’s most famous GAA supporters, Frank Hogan, who spread the gospel from the terraces with his yellow sign “John 3:7”, has died at the age of 81.

Mr Hogan, a born-again Christian from Co Tipperary became known for his yellow sign held aloft at matches. The sign referred to a verse from the gospel of John “Do not marvel that I said to you, ‘You must be born again’”.

It was a message of hope and forgiveness, explained his friend, Gerry Nugent. “He would have got terrible abuse at the start because people didn’t know what he was, but when people got to know him, they saw he was an incredible person and a man of powerful faith,” Mr Nugent said.

“People called him ‘John’ because of the sign. He was an institution. He went to All-Ireland Finals with no ticket and never failed to get in.”

His popularity among the wider GAA family, transcended all county lines, Mr Nugent added. “When Derry won the All-Ireland back in the 90s, he went up to Derry for the homecoming celebrations and he slept in his car. He used to have his dinner in my house and many other houses in Thurles. He was an absolute institution.”

Although his roots were in Borrisokane, he was regarded as a staunch Limerick hurling supporter. After moving to Shannonside with his parents when he was a child, he found a job as a tailor in McGoverns Menswear, William Street, a few yards his family’s restaurant Hogan’s on High Street.

Mr Hogan’s famous sign was once stolen as it travelled home by train from an outing in Croke Park in 2009. It was later recovered by gardaí after it was left in a public place, and returned to Mr Hogan.

Mr Hogan died at his home in Castletroy on Saturday. He is survived by his son Jason, daughter Natasha and wife Myrna.

She said on Monday: “I’m so upset at the moment. He’s going to be greatly missed by all his family and children. I’ve been looking after him for seven years, and the last five weeks in a hospital bed in his (home), as he didn’t have to go away in a hospital.

“He didn’t know, well, I think maybe the last week he knew he was dying, but I tried to keep it as nice as possible for him.

“His friends have got incredible stories of him — he was a great raconteur.”