Coronavirus: Weddings with more than 100 guests urged to cancel 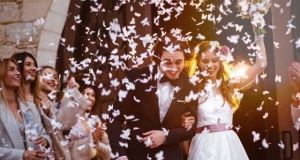 The recommendation that weddings with more than 100 guests be cancelled follows a significant increase in the number of cases of coronavirus in recent days. Photograph: iStock

Couples planning weddings have been called on to cancel them if there are more than 100 people in attendance, as part of the Government’s bid to deal with the coronavirus pandemic.

At a Government briefing on Thursday when unprecedented measures were outlined to limit the spread of the disease, the State’s Chief Medical Officer Dr Tony Holohan said it was the “clear recommendation” that indoor events such as weddings be cancelled where there are more than 100 people expected to attend.

“It’s a clear recommendation and it’s an expectation, as we’ve said that across society people will respond by accepting that recommendation and not proceeding with events that are above one hundred if they have it in an indoor setting.”

They were also recommending closure of museums, galleries and tourism sites as well as schools, crèches and other childcare facilities and higher education institutions.

The measures go into effect from 6 pm on Thursday until March 29th, some 17 days.

Dr Holohan said the recommendations followed a significant increase in the number of cases of coronavirus, also known as Covid-19 in recent days.

There had been a number of “cluster infections in hospital settings”, and reports of community transmission in a number of individual cases. This changed the situation.

He stressed that “decisive rapid co-ordination and comprehensive implementation of closures and quarantines is likely to be more effective in slowing the spread of the virus than a delayed implementation”.

Fr Charlie McDonnell of St Mary’s Church in Westport said he is due to officiate at a wedding on Saturday. He said the bride phoned him saying while more than 300 guests were due to attend she was now happy for it to go ahead with immediate family only, a gathering of around 30 people.

“She rang me, very calm, very philosophical … she said I’d like the wedding to go ahead,” he said.

When she explained that it would now be immediate family only, he told her “I said, ok. We won’t have a Mass and there will be no communion. We will do a service, we’ll be in and out of the church fairly quickly for that reason so that we’re not keeping people in a space but it’s a small number of people”.

He told the Ray D’Arcy Show on RTÉ Radio 1 he would not be breaking any guidelines that the State laid down earlier on Thursday in relation to gatherings. He added that he was now considering live streaming Masses on Facebook for the duration of the current shutdown.