‘I will put my hands up. I didn’t know I had to self-isolate,’ An Bóthar Rua barman says 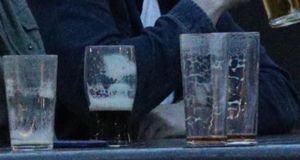 A Roscommon publican, who entered his busy bar last weekend, said he had not realised he was supposed to self-isolate while awaiting the result of a coronavirus test.

Gordon Murray has since closed his pub An Bóthar Rua, in the town of Elphin, after testing positive for the virus. However, he admitted he had entered the bar filled with 50-60 people on Saturday night while awaiting his test result.

“I will put my hands up and say I didn’t know I had to self-isolate. If I knew I was supposed to, I would not have been at the bar on Saturday,” he said, adding that he has been displaying mild flu-like symptoms.

He said he was in the bar for a maximum of 40 minutes on the night. He said he had not known in advance that an 18th-birthday party was being held at his bar.

When he arrived to check in on his pub shortly after 10pm, he found a party that consisted of “around 20 people” sitting around “about three tables”, he told the Roscommon Herald.

“Unfortunately we are in a small, tight-knit community and they are quick to point the finger. It is a lesson,” he went on.”

Separately, the Health Service Executive issued advice on Thursday for people living in north Roscommon and the wider Elphin region, saying that public health officers are “aware” of Covid-19 cases in the area.

Public health officers have carried out an examination of the local situation, and close contacts of people who have tested positive for the virus in recent days are being contacted.