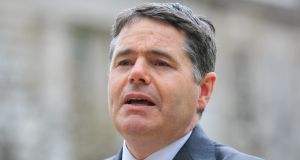 Minister for Finance Paschal Donohoe: has scheduled a series of bilateral meetings with Ministers in an attempt to rein in expenditure and hold departments to their budgets. Photograph: Gareth Chaney Collins

Public servants are to seek a shorter working week and the abolition of extra hours agreed during the financial crisis, in a move the Government estimates would cost more than €600 million.

The latest move, to be tabled by the State’s largest public service union, Fórsa, this month, comes amid growing concern in Government about escalating public sector pay costs after Ministers signalled pay concessions at trade union conferences over the Easter period.

Under a previous pay agreement, public servants agreed to work a longer week to avoid further pay cuts. The amount of time varied from sector to sector, but in most cases was between two and 2½ hours a week.

Now, with pay cuts imposed during the crisis largely reversed, Fórsa wants the extra hours abolished, though the move is certain to be resisted by the Government, sources say.

The Government’s position has traditionally been that while pay cuts introduced during the austerity years were temporary, productivity measures, such as the extra hours introduced at the same time, were permanent.

Nonetheless, the move by Fórsa will put further pressure on the Government, which is already facing significant pay demands from various groups across the public service in the wake of its settlement with nurses after their recent strike.

Before Easter, Minister for Finance Paschal Donohoe warned his Cabinet colleagues about the need to control spending. He has scheduled a series of bilateral meetings with Ministers in an attempt to rein in expenditure and hold departments to their budgets.

The potential costs of shortening the working week for public servants have alarmed officials. In a paper drawn up in 2017, the Department of Public Expenditure and Reform estimated that the abolition of the additional hours could cost more than €620 million.

In a bulletin to members ahead of a conference of civil servants and local authority staff this week, Fórsa general secretary Kevin Callinan said the longer hours affected mainly those on low and middle incomes and, in particular, women working in the public service.

He said continuing on with this requirement for longer hours without additional pay was “not fair”.

Mr Callinan said the increased working hours were agreed when the country was experiencing “torrid times”.

He said under this deal a further pay cut was imposed on those earning more than €65,000, while other staff saw their working hours lengthen.

Mr Callinan said that by January 2018 the Haddington Road pay cut for higher earners had been reversed in full, but the longer working hours for the other groups of public service staff remained in place.

“And, however justifiable increased working time may have been during the crisis, it goes against the prevailing grain of efforts to better balance work and family responsibilities.”

When we were in the eye of the economic storm, I opposed similar conference motions. But I’d struggle to construct a convincing argument against them now

Mr Callinan said Fórsa conferences of workers in health, local government and the civil service would this month “adopt policies calling for the restoration of the time lost by those on low or middle incomes during the crisis”.

“A few years ago, when we were in the eye of the economic storm, I opposed similar conference motions. But I’d struggle to construct a convincing argument against them now, in light of our current economic performance and rapidly developing technological possibilities.”