Candidate ‘confused’ by party statement after campaigning throughout review process 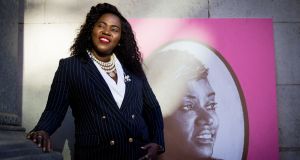 Social Democrats candidate Ellie Kisyombe has said her local election campaign continued throughout the party’s review of her case and she was “confused” by the statement issued by the party afterwards.

On Saturday, the party said Ms Kisyombe would proceed as a candidate in Dublin’s north inner city after a review of allegations of inconsistencies in the story of her arrival in Ireland and entry into direct provision. She has been living in direct provision for much of the past decade.

An independent review was completed last month following internal divisions after The Sunday Times revealed in February that the candidate, originally from Malawi, arrived in Ireland in April 2011 and secured a student visa, before travelling to the UK and claiming asylum there. Ms Kisyombe has claimed she sought asylum immediately after arriving at Dublin Airport.

In its statement following the review, the party said: “Following a number of recommendations arising from the review, the candidate has undertaken a series of commitments including revising her campaign literature to properly reflect her history and circumstances. The candidate has also corrected the chronology of her back story to the satisfaction of the National Executive at this time.”

On social media, however, Ms Kisyombe said she was “slightly confused by the statement” as her campaign had continued throughout the review.

On Twitter and on her Instagram account, Ms Kisyombe said: “I’m delighted to have submitted my nomination forms to the DCC (Dublin City Council) returning officer this morning. It’s great that the review has finally completed.

“However, I’m slightly confused by the statement. My campaign continued throughout as the purpose of the review. I want to take this opportunity to thank my lawyer Mr Gary Daly, a man with high integrity!

“My campaign manager, my mentor, a good friend, my confidant Gary Gannon councillor and all the members of the party of the entire Social Democrats around the country for standing with me. Lastly, I’m looking forward to May 24th now.”

After The Sunday Times article was published, three members of the Social Democrats national executive resigned, including its chairman and deputy chairwoman, Joe O’Connor and Carly Bailey and a third member Chris Bond.