Varadkar apologises for his remarks in controversy over Waterford mortuary 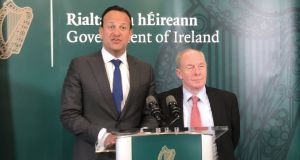 Taoiseach Leo Varadkar has apologised for his role in the controversy over the mortuary at University Hospital Waterford after criticism of his remarks which had alarmed many in his own party.

In a statement on Saturday, Mr Varadkar admitted he was wrong, and said he wanted to “apologise unreservedly” to anyone who felt he had played down the seriousness of the refrigeration issues raised by four pathologists at Waterford University Hospital.

They said dead bodies had been left lying on trolleys at the hospital, leaking bodily fluids onto corridors and making closed-coffin funerals unavoidable in some cases.

Earlier last week Mr Varadkar said he was not sure if the claims were true, and referred to there being “no evidence” to support the “strange story”.

In Westmeath on Friday, he said he regretted if he had struck an adversarial tone when questioning the revelations.

However, on Saturday afternoon he moved to make a stronger apology in a statement acknowledging his error over the “deeply disturbing” controversy.

The Fine Gael leader said there were “conflicting accounts” when asked during the week about the distressing conditions at Waterford mortuary.

“On the one hand, a letter from four consultants making deeply disturbing claims about conditions in the mortuary, and on the other hand a statement from hospital management saying there was no evidence or supporting complaints to back up the claims,” he said.

“I did not want to jump to conclusions or to side with one group or staff against another without knowing facts or before an investigation was carried out. That’s why I said that I did not know if the claims were true or not.

“Over the course of the week corroborating statements have come to light, and complaints have been made that I believe support the views expressed by the four consultants.

“I want to apologise unreservedly to anyone who feels that I did not treat this issue with the seriousness or sensitivity it deserved.”

In his statement Mr Varadkar said it had “never been in dispute that the mortuary is sub-standard and needs to be replaced”.

“Planning permission has been granted for a new one, and I am assured that it will go to tender and construction this year. In the interim temporary measures are being put in place.”

Other political parties have rounded on Mr Varadkar over his original response to the revelations, with Labour leader Brendan Howlin accusing him of “Trumpian” tactics by disparaging as false truths that was inconvenient.

Some Fine Gael sources were privately alarmed by the Taoiseach’s handling of the affair.

One senior party figure said there was “a lot of annoyance” in the parliamentary party about the controversy. “There was a way of handling that mortuary story. It wasn’t the way he did it this week.”

One TD said it was “the kind of error you’d expect from a first-term backbencher”.