Former British soldiers who served in the North are being ‘persecuted’, veterans say 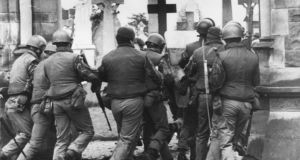 British troops in west Belfast on April 19th, 1976. Former British soldiers who served in the North during the Troubles are being ‘persecuted’, veterans’ groups have claimed. File photograph: Keystone/Getty Images

Former British soldiers who served in the North during the Troubles are being “persecuted” through legacy investigations which they claim are politically motivated, veterans’ groups have told the House of Commons Northern Ireland Affairs Committee.

The Westminster committee heard evidence from former members of the security forces on Wednesday as part of its inquiry into the UK government’s proposals to address the legacy of the Troubles in Northern Ireland.

“The focus seems to be on prosecuting veterans as opposed to those who committed the most heinous human rights abuses,” Paul Young, of the Justice for Northern Ireland Veterans group, told the committee.

Robin Horsfall, a spokesman for the Million Veterans March, said its members believed the “renewed investigations, arrests and trials of soldiers who were previously investigated and exonerated has achieved nothing”, and that veterans were being used as a “buffer between the two partisan groups, somebody that can be attacked and be used as an excuse to change the narrative and to rewrite history completely”.

A commitment to introduce legislation to implement the provisions on legacy issues outlined in the 2014 Stormont House Agreement within 100 days was one of the pledges of the New Decade, New Approach deal which restored the North’s Assembly in January.

Among the provisions was the creation of an independent Historical Investigations Unit (HIU) to investigate Troubles-related deaths.

In March, the Secretary of State for Northern Ireland, Brandon Lewis, outlined in a written statement to the House of Commons a new British government approach to dealing with legacy issues, which included “significant changes”.

Under the new proposals, only cases where there is a “realistic prospect” of prosecution would be investigated, and all other cases would be closed permanently, Mr Lewis stated. This, Mr Lewis said, would end “the cycle of reinvestigations into the Troubles in Northern Ireland that has failed victims and veterans alike”.

These new proposals have been opposed by victims’ groups. The North’s victims’ commissioner, Judith Thompson, told the committee last month that it “remains the Commission [for Victims and Survivors]’s view that legacy mechanisms as envisaged in the Stormont House Agreement offer the best opportunity to address the legacy of the past”.

However, on Wednesday the veterans’ spokesmen said they rejected the provisions of the Stormont House Agreement, and told the committee they needed to see more detail on the new approach, with Mr Young adding that he took “some small comfort” from the proposal that there would be only a brief review of cases which had been examined previously.

Whatever is taken forward, Mr Young said, “must be acceptable to the wider veteran community”.

He said the Overseas Operations Bill, which is currently making its way through the UK parliament, “has a lot of good things in it”, and that there should be similar legislation covering Northern Ireland and the rest of the UK.

The Bill, which is aimed at British service personnel who served in Iraq and Afghanistan, protects veterans from historical allegations resulting from deployment abroad by setting a five-year time limit for complaints.

Asked by North Antrim DUP MP Ian Paisley jnr if veterans felt “betrayed by how legacy has been handled” and if there had been an “attempt to rewrite history”, Mr Horsfall agreed, saying that “absolutely we believe there is a determination by the republican movement to rewrite history.

“We feel that the [British] government is prepared to put a few old soldiers on a cross and sacrifice them for the benefit of peace in Northern Ireland or to keep the lid on Sinn Féin-IRA in order to stop people returning to increased levels of violence.”

Challenged on this by the chair of the committee, the Conservative MP Simon Hoare, who said that “you have no evidence for this”, Mr Horsfall replied: “It’s how we feel rather than pointing specifically to evidence, our members feel this way, it’s our perception.”

Belfast South SDLP MP Claire Hanna asked the veterans’ spokesmen if they could provide figures to back up their allegations of vexatious claims and a cycle of reinvestigation against former soldiers.

Mr Horsfall said he was “not aware of those figures”, but Ms Hanna said there were currently five live prosecutions related to former soldiers.

“I don’t know that is wildly disproportionate,” she said, “and while I would absolutely share your frustration about the lack of prosecutions of paramilitaries, I think many of us feel that the state should be held to a little bit of a higher standard than illegal terror gangs.”

She said she appreciated that that may feel “disproportionate”, and put it to the spokesmen that “a prosecution either passes the threshold or it doesn’t, and therefore the term vexatious is a misnomer”.

Mr Horsfall said former soldiers did not want an amnesty, because this would imply guilt.

“We are most upset about people who have been previously cleared and exonerated being reinvestigated, time after time, for political purposes,” he said.

“We don’t want amnesties for people who have clearly committed crimes and broken the law, and if something new, compelling and credible came up then we would support a prosecution just as anybody else would.

“The word amnesty, it really isn’t something that we want. We want people that have been investigated to be left alone and we want anything new and credible to be judged by somebody who is completely senior and independent.”

In many cases, victims’ groups which represent the families of those killed by the security forces during the Troubles contest the military’s interpretation that the deaths were properly investigated at the time.

The chairman of the association, former assistant chief constable Raymond White, said that collectively there was a feeling among officers “of having subjected themselves to 20 years of re-examinations, of having participated in inquests, participating in public inquiries, participating in inquiries for the ombudsman’s office”.

“A true picture of the role of the police in the past has not been presented,” he said, adding that “a lot of officers are still under investigation, 15, 16 years on”, and they had been “left in limbo with no conclusion arrived at”.

He told the committee the association was opposed to an amnesty, and if a criminal offence occurred then due process should be used to investigate it.

Mr White said he believed the British government’s new proposals were an improvement on the Stormont House Agreement and were “fairly realistic”.