PSNI considering whether to inquire into three £10,000 payments to Sinn Fein 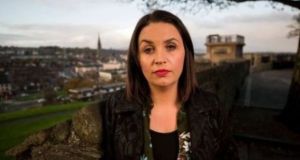 The fallout from the erroneous payments has led to Sinn Féin senator and former Foyle MP Elisha McCallion (above) and two party officials resigning from their positions. File photograph: Liam McBurney/PA Wire

The PSNI is considering whether to investigate the payment of three £10,000 Covid-19 business hardship grants to three ineligible Sinn Féin offices, it was confirmed on Friday.

DUP Assembly member for Foyle Gary Middleton wrote to the PSNI chief constable Simon Byrne asking police to investigate whether a “potential offence” may have been committed.

“We can confirm a communication was made to the chief constable in relation to Covid-19 grant money. We are considering the matter as to whether a criminal investigation is required,” said a police spokesman.

The fallout from the erroneous payments has led to Sinn Féin senator and former Foyle MP Elisha McCallion and two party officials resigning from their positions.

The grants were erroneously paid to the three Sinn Féin offices by the North’s Department for the Economy in late March and April.

However, it was not until BBC Radio Ulster’s Nolan Show raised the issue at the beginning of the week that the money was repaid.

On Thursday Ms McCallion apologised “unreservedly” for her “poor judgment”, and said that she was resigning as a member of Seanad Éireann “with immediate effect.”

The other two grants went to a Sinn Féin office in Lurgan, Co Armagh and to the office of Sinn Féin Assembly member Maoliosa McHugh in the West Tyrone constituency.

There was no pressure on Mr McHugh to resign because he said when he first became aware of the receipt of the grant he had immediately asked for the money to be repaid, but that his instruction was not carried out at the time.

Mr McHugh’s solicitor said that the money to Mr McHugh did not go to his personal account but to Sinn Féin’s West Tyrone account.

The Traditional Unionist Voice leader Jim Allister however said that “if, as the Department of Finance says, Mr McHugh MLA was the ratepayer recipient, and therefore beneficiary, of the £10,000 Covid support payment, then, the return of the money was his personal responsibility”.

Mr McHugh’s solicitor told the Nolan Show on Friday that it was clear that the money was not paid into his account, or any account that he was a signatory to, or any account bearing his name.

DUP MLA Mr Middleton, who raised the issue of the three payments with the PSNI chief constable Mr Byrne, said it remained to be seen whether “individuals lower in the Sinn Féin pecking order have been sacrificial lambs”.

“Sinn Féin are all too keen to demand honesty and integrity of others. It is important that this Sinn Féin financial scandal is investigated in a robust and appropriate fashion to uphold public confidence,” he said.

SDLP MLA Matthew O’Toole asked “why are junior staff being dismissed when the money was provided to the office of a Sinn Féin MLA who today remains in post but has confirmed that he knew the money had been received in error”.

The Sinn Féin president Mary Lou McDonald apologised for the failure to pay back the money shortly after receipt. “These monies should have been returned immediately as no political offices qualified for this grant. The fact that this did not happen is unacceptable,” she said.