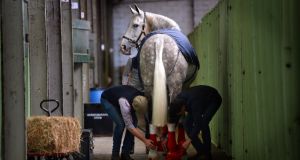 Kevin Skelly, Ivan Ryan and Joseph Coyle (at the far side of the horse), all from Rolestown, Dublin, with Pushkin, (Smurf) at the opening day of the Dublin Horse Show in the RDS, Ballsbridge. Photograph: Dara Mac Dónaill

A no-deal Brexit would be “detrimental” to the horse industry, the chairman of the Northern Ireland Horse Board has said.

Speaking at the Dublin Horse Show on Wednesday, Hugh McCusker from Co Armagh said the sport has been “abandoned” in Brexit negotiations and called for guidelines to secure the future of the industry.

Mr McCusker said the UK crashing out of the EU would result in horses entering the Republic having to undergo tests to cross the Border, at a cost of between £300 and £400 each time.

“We have to get a vet, there has to be blood tests taken, the horse will then have to go and be inspected when it goes south,” he said. “Horses that go to the North, there’s no problem, they go straight through but they will have to go through that process to come back down to the south; even if it was just for a one-day event.”

He added: “The majority of our horses is for a leisure [activity]. They cannot afford that sort of money. If we have a no-deal, it will be detrimental to the horse industry within Ireland.”

Approximately 15 per cent of Irish horses come from the North each year, and international horses must come to the Republic via the UK due to animal welfare laws.

“Every other aspect [of Brexit] has been looked at, but the horse side of things has not. Without a doubt, we’ve been abandoned in the negotiations. It would be nice just to get our views heard and to get some sort of guidelines,” he said.

The Northern Ireland Horse Board has proposed that a licence-plate system, similar to those on cars, comes into place for horses in the case of a no-deal.

The Horse Show was officially opened in the RDS in Dublin on Wednesday by Paul McAuliffe, the Lord Mayor of Dublin, who arrived by horse-drawn carriage.

The event, which is celebrating the 100th anniversary of women first being allowed to show jump, is running until August 11th. About 100,000 people are expected to attend over the five days.

Stuart Clarke, who runs Cavan Equestrian Centre, close to the Border, said extra tariffs to check horses coming into the south could “cripple” the industry.

“To put €300, that would definitely stop a horse travelling from the North to Cavan or Mullingar, that would cripple it. It is scary because there is the potential for a disastrous result but I am really hoping that there will be common sense seen,” he said.

“We are where we are, we’re there now since 1983 running events. We’ve spent about €15 million on the premises since its conception in 1983. We can’t move our location so we have to make it work the best we can where we are,” he added.

However, Mr Clarke said while a no-deal Brexit might result in Irish breeders earning less for their animals, he doesn’t believe UK buyers will stop engaging with Ireland altogether.

“If [the UK goes] out with a no-deal, or whatever the scenario is, I don’t think the people who buy horses are going to stop,” he said. “There maybe extra paperwork, extra tariffs or duty, which could weaken their spending power, and which would weaken the price to the seller here in Ireland. That could be the effect but I don’t think it [buying from Ireland] is going to stop.”