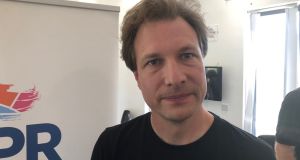 Daniel Holder of civil liberties group Committee on the Administration of Justice: asylum seekers and welfare recipients have a ‘right to a private life’

A covert policing commissioner for Northern Ireland should be appointed to deal with complaints from people such as welfare recipients and asylum seekers who fear they are under “Big Brother” scrutiny, a West Belfast Féile an Pobail event heard on Wednesday.

The panel discussion organised by the Belfast-based human rights non-governmental agency, Participation and Practice of Rights (PPR), was told the level of surveillance by British and Stormont government departments on asylum seekers and people on benefit, including the disabled, was causing mental distress and paranoia.

In a comment provided to the event, Philip Alston, the UN special rapporteur on extreme poverty, said “the tragedy is that most people will assume that the ever-more-intrusive surveillance by the UK welfare state is only aimed at the bad guys”.

“It’s not – it will soon affect everyone and leave the society much worse off. Everyone needs to pay attention and insist on decent limits.”

The Department of Work and Pensions (DWP) in Britain and the Department for Communities (DfC) handle welfare payments. Of the annual £6 billion welfare bill in Northern Ireland it is estimated that £92 million is lost through benefits fraud.

“To me people are put through enough hell without having to worry about being spied on and having an employee of DfC or DWP seeing what they bought from the shops. It would make anyone who is mentally ill even more so as it would raise their paranoia levels,” she said.

Sipho Sibanda, of the asylum seekers’ Housing 4 All campaign group, said many of the more than 900 people seeking asylum or appealing adverse asylum decisions in Northern Ireland felt they were under unfair surveillance.

Ms Sibanda, from Zimbabwe, who was granted residency in the North, said such vulnerable people each received £37.75 a week for food and other requirements.

She said that asylum seekers were careful about using their money to buy toys or ice-cream for their children in case they would be judged “to be wasting money”.

“Years of changes to immigration policy have created a deliberately hostile environment for people seeking asylum. Every aspect of their life is monitored,” she said.

“These policies create fear and paranoia amongst a community of people who have already suffered greatly in being forced to flee their countries,” she added.

“People should be free to enjoy normal lives like everybody else.”

Rick Burgess, of the Disabled People Against Cuts action group from Manchester, said that such was the level of surveillance in Britain that it was “pretty similar to living under the Stasi in East Germany”.

“People are not paranoid because they are actually out to get you,” he said.

Sara Boyce of PPR said that “people are already living with Big Brother”, with such surveillance creeping “deep into every aspect of life”.

“This is having a massive impact on people’s mental health,” said Ms Boyce. “It is creating a culture that if you are looking for benefit and if you need the state to support you – and that is your right – that you are workshy, that you are a scrounger.”

“That is the phrase used by dictators through the ages. It’s the wrong question; the question is the right to a private life,” he said.

Mr Holder said that under the Belfast Agreement, and more particularly the Patten police reforms, it was proposed about 20 years ago that a covert policing commissioner should be appointed so that people who had concerns about surveillance could make complaints. He said it was about time such a position was created.

A spokeswoman for the DfC said it does not have specific arrangements or shared policies with any particular retailers to access CCTV. The department, however, had a “full range of powers to investigate and gather evidence in respect of suspected benefit fraud, which includes the gathering of surveillance evidence where that is appropriate”, she added.

“In the event that such powers are exercised, that is of course done so within appropriate legislative requirements including the Regulation of Investigatory Powers Act,” she said.