Unionist sensitivity and question over name of country raised 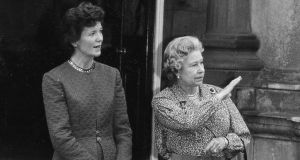 A proposal by a senior Northern Ireland Office official that the British monarch might mark the ending of violence in the North after the 1994 ceasefires by sending a cordial message to then president Mary Robinson to mark St Patrick’s Day was rejected on grounds of unionist sensitivity. This is revealed by previously confidential files released on Friday by the Public Record Office in Belfast.

The issue was first raised on March 1st, 1995 when Donald Lamont, an official in the Republic of Ireland section of the NIO, suggested in a note to a colleague, J Dew that such greetings from Queen Elizabeth II to foreign heads of state was the norm: “As you know, I intend to recommend that the Queen this year diverts from practice whereby she has sent no message of congratulations to the Irish President on the Republic’s National Day”.

He gathered that “the reason for this omission, unique among members of the European Union”, lay “more with Irish reservations about dealing with the Royal Family than with any reservations on our part”. In Lamont’s view, if the message was sent and politely received, it would be “a gain for us, not a concession”.

The message agreed for global use by the queen ran: “On the occasion of your National Day, I have much pleasure in sending you and the people of [name of country] my congratulations. Elizabeth R.”

In Lamont’s view, two questions arose. The first was how they would deal with “the name of President Robinson’s country”. He wondered whether the use of the term “Republic of Ireland” would be regarded as “point-scoring” and, alternatively, whether the term “the people of Ireland” would be “seen in NI as too ambiguous”. It might be better, the official felt, to adopt some formulation such as “you and your people”.

Secondly, in light of the ceasefires, he wondered if some efforts to improve “the climate of relations between Britain and Ireland should be appropriate”. He suggested a sentence from Queen Elizabeth, stating: “I believe that our two countries have led the foundations of a new beginning in NI and the island of Ireland and I send you my warmest good wishes for the future”. Any such formula, he felt, should be “as clear and invulnerable to criticism on grounds of political content as possible”.

Lamont’s suggestion was strongly supported by the permanent under-secretary at the NIO, Sir John Chilcot. However, writing to officials on March 2nd, 1995, he said felt that the country “should be properly described as the Republic of Ireland” – he felt that the “people of Ireland” was too broad and “seen as heavily biased to the notion of a united Ireland”.

That should have been the end of the matter but the proposal drew a sharp, hostile response from Chris MacCabe of the NIO political affairs division who asked, “Why now?” Maccabe accepted that a message from the queen to President Robinson would be “a gain” for the British side, but added: “I doubt if many unionists would see it that way”.

The final word was left to the NI Secretary Mayhew. In a memo on March 6th, Mayhew expressed the view that “it was less sore-making to maintain the practice of silence” towards the Irish president.

The Taoiseach, John Bruton, he commented, had recently described Anglo-Irish relations as “excellent” and he felt that they should not be worried by sticking to past practice “especially when Unionist sensitivities are understood in Dublin as never before”, (this was a reference to recent informal contacts between the Irish government and unionists).