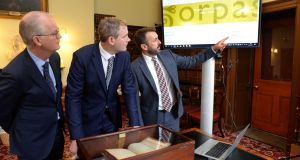 Manuscripts chronicling medieval Irish history, oral material collected with the earliest recording devices and a 1607 account of the Flight of the Earls are among an extensive range of resources that will be drawn upon to complete the most comprehensive dictionary of Irish material produced over the last 400 years.

Work on the project to create ‘Foclóir Stairiúil na Gaeilge’ (Historical Dictionary of Irish)  will be funded for the next five years  by a €920,000 Government grant.

The funding will help complete the dictionary and will be used to strengthen a seven-strong team of lexicographers and researchers already working on the project at the Royal Irish Academy.

One of the most ambitious linguistic research projects to be undertaken in the history of the State, the corpus already consists of over 3,000 texts and 19 million words which are freely accessible online.

Dictionary editor Charles Dillon says the funding, announced by Minister of State for the Irish Language Seán Kyne, will help lay a foundation for the next phase of the project which will see the inclusion of audio recordings made in Gaeltacht areas during the first decades of the last century.

“The funding will allow us to extend our capability. We can improve and extend our current corpus of words to 90 million words. It will also allow us to create a corpus of spoken Irish and all of this will create a foundation for the new dictionary.”

Collated using material from a variety of documents and manuscripts, including the 1607 account by Tadhg Ó Cianáin of the Flight of the Earls, the dictionary will capture the development of modern Irish language over the 400-year-period 1600-2000.

It will chart the morphological, contextual, and semantic development of words which will give a greater insight into Ireland’s language and culture during the period.

“The easiest comparison is with the Oxford English Dictionary,” says Dillon.

“You search for a word and the search provides you with the earliest use of the word, who used it, and in what context it was used. It provides a history of the use of the word through the ages. That is our goal.”

One example he cites is the word ‘nasc’.

Irish speakers who use the internet will be familiar with the use of the word which translates into English as ‘hyperlink’.

Nasc describes the everyday action online that allows the reader to access material by clicking or tapping.

Fewer will be aware of the origin of the word which in the past referred to a collar or necklace worn by warriors to indicate their allegiance in battle.

“That is an example of the development of the language over some 2,000 years where it was once used in an ancient context but is now used to describe something very modern.”

Language processing software is being developed in consultation with experts at TCD, the University of Missouri, St Louis, and a company in the Czech Republic to help organise the information.

“The dictionary will be online rather than in print and there is a big difference in the layout and work involved in the presentation of material in a digital format,” Mr Dillon says.

Describing the project as an initiative of “national and international importance”, Mr Kyne said: “As a result of the work carried out to date, valuable aids are already available, not just for language scholars but also for those with an interest in the history and culture of Ireland. This funding will allow for the development of the dictionary in the coming five years and I look forward to seeing the fruits of that labour.”

The Foclóir Stairiúil na Gaeilge project, which is an initiative of the Royal Irish Academy, has been supported by grants from the Department under commitments made in the Government’s Irish Language Action Plan.