CDU spokesman says UK would have to make major concessions 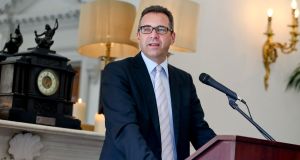 Speaking in Berlin, Dr Joachim Pfeiffer said he hoped border controls and customs checkpoints could be avoided, but this would require major concession by London. Photograph: Maxwells

Promises by the United Kingdom that a hard Border on the island of Ireland will not be needed after Brexit happens are “illusory”, a top ally of Chancellor Angela Merkel has warned.

Speaking in Berlin, Dr Joachim Pfeiffer said he hoped that border controls and customs checkpoints could be avoided, but this would require major concession by London.

The United Kingdom would have to accept the European Union’s four basic freedoms for the post-Brexit era – including freedom of movement, which British officials have flagged as unacceptable, he said.

“It can only work if Britain is ready to accept these four freedoms into the future, or [if] a special solution is found for Northern Ireland, which I cannot imagine at the moment,” he said.

He was speaking at the launch in Berlin of an expanded report on Ireland’s Brexit challenges by the Dublin-based German-Irish Chamber of Industry and Commerce (AHK).

Describing a recent visit to Berlin by British MPs as “ghoulish”, Dr Pfeiffer said their lack of clarity on what the UK wanted or how it planned to achieve had left him pessimistic over the outcome of the complex talks.

He said he now believed that a so-called “hard Brexit” – with no agreement on trade and no transitory arrangements – is just likely as any of the other options.

Meanwhile, he sent mixed signals over whether Northern Ireland would have automatic rights to enter the European Union if a united Ireland occurs in the year ahead, as happened for East Germany’s after German unification.

Asked whether he shared Dublin’s view that the East German precedent of 1990 offered an EU back door to Northern Ireland, he said it was “difficult, as it is a domestic political matter for the UK”.

“The situation in [1990] was different, you didn’t have the EU the way it is now, not even with the Treaty of Maastricht,” he said. “It was still the European Community, which was limited to certain policy areas and even the single market came later, so I think the situations aren’t comparable.”

A final Brexit agreement will require backing of national parliaments and the German Bundestag, with powerful committees, is one of Europe’s most independent parliaments.

Emphasising that he is aware Brexit could see the Northern Ireland peace process “begin to simmer” once more, he went on: “I would like to say, whether it is Solomonic or diplomatic, that the door to the EU stands open to all of Ireland.”

Given widespread uncertainty over Brexit talks, the German MP said it “could not be ruled out” that the decision by British voters last year to leave the EU had “lit the fuse” under the UK’s future unity.

Meanwhile, European Chamber president Jack Golden proposed that Ireland should be able to ferry exports to the rest of the EU across Britain without complications, if hauliers use sealed trucks and containers.

“There are technical solutions but companies have to be willing to invest,” he said, though Dr Pfeiffer likened the idea to Vladimir Lenin’s 1917 journey to St Petersburg after the collapse of Tsarist Russia.