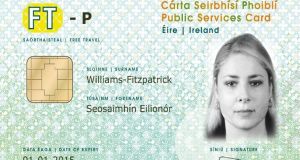 The Government is examining potential uses for the public services card, including as a passport card.

The project to develop a public services card (PSC) has its basis in government decisions taken as far back as 2004, which aimed to modernise the delivery of public services.

A key advantage, according to the departments driving the project – Social Protection and Public Expenditure and Reform – is that the delivery of services is more efficient when a person’s identity does not have to be authenticated at every transaction. They also believe the card has already begun to reduce rates of fraud, forgery and error.

State databases containing vast quantities of citizens’ information are of concern from a fundamental rights perspective, due to fears they may be hacked, sold or otherwise abused for unintended purposes. Here, there have been concerns about leaks of data from the Department of Social Protection to private investigators.

Records obtained under the Freedom of Information Act reveal the Government is examining other opportunities for the use of the card, including the possibility that it might meet international standards to use as a passport card. The Health Service Executive wants to link a citizen’s individual health identifier – due to be rolled out at the end of this month – to the PSC.An Garda Síochána also wants access to the system.

Obtaining a card usually involves a face-to-face appointment at one of more than 100 locations across the State. This so-called Safe registration process involves capturing a photograph and a digital signature.

The Department of Social Protection has, however, also issued the cards by post to some customers it considers to be at “low risk” of committing fraud. More than 2.3 million have been issued to date.

Minister for Social Protection Leo Varadkar told the Dáil this month that, as of April 25th, 155 suspected cases of identify fraud had been referred to his department’s special investigations unit or An Garda Síochána. Successful prosecutions have been finalised in 21 cases, with 18 people receiving custodial sentences.

The Department of Social Protection has an annual budget of almost €20 billion. More than 1.6 million people a week receive a welfare payment. Last year, the Comptroller and Auditor General published a report on the rollout of the PSC and said there was “no single business case” for the card set out at the start of the project, which will cost about €60 million by the end of the year.

Ireland, the UK and Denmark are the only European Union countries which currently do not have national ID cards. They are used uncontroversially in other member states. There have been various efforts to introduce compulsory ID cards in Britain, but they have been vigorously opposed by civil liberties groups, including Liberty and an organisation called No2ID.